Think of Bentley and what springs to mind is an old English luxury coachbuilder renowned for its handcrafted vehicles.

Time has moved on, however, and Volkswagen now owns the Bentley brand, in much the same way that BMW now owns Rolls-Royce. Both manufacturers build thoroughly modern cars but still employ a degree of handcrafting.

This Bentley Flying Spur, for example, is a large four-door saloon that competes with the formidable Rolls-Royce Ghost. Unlike its chief rival, though, there are two engines to choose between: a V8 and a W12.

Part of the allure of buying in this segment is the option to make your Bentley a personal statement. The only real limitation is your imagination, but don’t expect any of these fancy touches and personalisation options to come cheap.

So, if a Bentley sounds like an enticing proposition, read on over the next few pages to get our in-depth impressions of the Flying Spur. 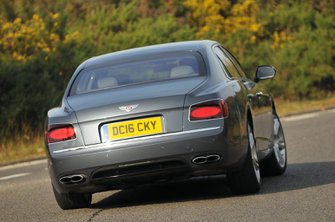 Yes, it has flaws such as some iffy interior plastics and a sl...