More for you |
2021 DS 9 luxury car revealed: price, specs and release dateWhat is GAP insurance and how much should you pay for it?Why does the new Hyundai i10 get five stars?New MG ZS EV vs new Renault Zoe2020 Jaguar XE long-term test review
Home
News
Bentley plots greener future
news

* Diesels and hybrids on the way * plug-in technology possible, too * More variants planned... 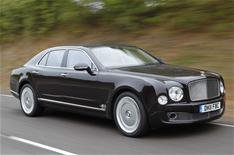 Bentley is planning to put both diesel and hybrid cars into production, company boss Wolfgang Durheimer has revealed to What Car?.

Durheimer also revealed that existing models will get the option of diesel engines, which could mean TD Continentals and, possibly, a diesel Mulsanne.

We wont miss out on diesel technology. Diesel and hybrid are a priority, he said.

Both models could also be offered with plug-in hybrid systems as well, allowing them to use electric power alone for short distances before utilising petrol power, assisted by batteries.
Both systems would come from technology existing inside the VW Group.

Durheimer hinted that the company could use the 4.0-litre V8 diesel from the Audi A8, but six-cylinder diesels are also being considered to power future Bentleys.

He also revealed that many more Bentley variants are being planned, including further Continental models. A new Flying Spur saloon should appear within 12 months and there will also be lighter, sportier versions of the GT Coupe.

The Mulsanne family will also expand with a long-wheelbase version of the saloon, plus a coupe and convertible.