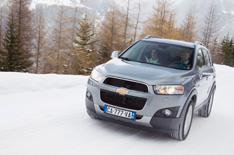 It's going to be a busy year for Chevrolet. The company has only just released the new Orlando MPV, and this will be followed by no fewer than six new models by the end of 2011. This is the first of them the heavily revised Captiva, which will hit UK showrooms in May.

Just like the Vauxhall Antara, with which the Captiva shares its mechanicals, the Captiva has been given a sharper look, tweaked suspension, and two new 2.2-litre diesel engines, one with 161bhp and one with 181bhp.

As well as being stronger and cleaner than the Captiva's outgoing 2.0-litre diesel, the new engines are much quieter and smoother. In fact, refinement has improved all-round, and when combined with the smooth ride and soggy-but-secure handling, the Captiva has a very relaxed feel on the road.

The cabin has bags of space and a big boot, too, and higher-grade versions have seven-seats that work in the same way as the Orlando's. That makes it practical and reasonably versatile.

However, despite its upgraded materials, the interior still has a decidedly low-rent feel. Especially when you consider the Captiva's price. The cheapest version with five seats and four-wheel drive costs £21,995 (£2000 more than the equivalent Antara), while the cheapest four-wheel drive seven-seater costs £27,695. With a Hyundai Santa Fe costing less than £23,000, that's hard to justify.

Good-looking and likeable, but too pricey to recommend