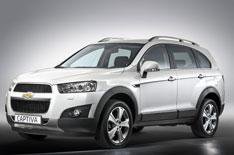 An updated Chevrolet Captiva will make its debut at the Paris motor show later this month.

The updated 4x4 has a new bonnet and grille design, and new headlight clusters. The car will be available with three new engines a 169bhp 2.4-litre petrol and two 2.2-litre common-rail diesels with either 161bhp or 181bhp.

While all engines will be Euro V-compliant, Chevrolet has yet to announce emissions or fuel economy figures for the three versions. All cars come with either a six-speed manual gearbox or a six-speed auto.

Chevrolet says the Captiva's chassis has been re-tuned to improve cornering, roll characteristics and ride.

The Captiva's interior has been refreshed and the sound system now comes with Bluetooth connectivity, an aux-in socket and a USB port.

The car won't be on sale until May 2011, and although prices have yet to be revealed, the company says prices 'won't be that different' to the current version, which starts at 18,580 for a 2.4-litre five seat version.

The Captiva is one of four premiers Chevrolet is showing at Paris. Alongside the Captiva will be the new Aveo supermini, Cruze hatchback and the Orlando MPV