* Cruze hatchback to be shown at Geneva motor show * Will go on sale alongside the saloon in the summer * Prices and specification to be confirmed nearer the time... 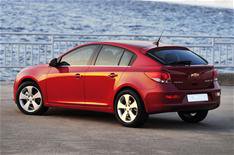 Chevrolet will launch the new hatchback version of its Cruze saloon at the Geneva motor show tomorrow.

The new five-door model looks very similar to the concept car that was unveiled at the Paris show last September. Chevrolet says that, with its coupe-like roofline and short front and rear overhangs, the Cruze hatchback brings a new sleekness to the range.

Full details of the car are yet to be confirmed, but ahead of the Paris show last year, Chevrolet told us that the five-door, five-seat car would have a 400-litre boot (50 litres less than the saloon), with 60/40 split-folding rear seats.

Chevrolet has also said the hatchback will have a new range of Euro V emissions-compliant engines, including the range-topping 161bhp 2.0-litre diesel engine from the recently launched Orlando MPV. These are expected to find their way into the saloon in due course.

The new car will reach British showrooms in the summer, and exact prices and specifications will be confirmed nearer the time.