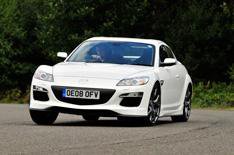 The Mazda RX-8 differs from most other coupes on the road, because it uses a unique powertrain and has four doors. Mazda has a good reputation for reliability and the RX-8 always performs well in the JD Power survey making it an interesting used proposition for buyers who want something a little different. However, there are some common problems to look out for.

Coupes are not usually known for their practicality, but the RX-8 has space for four adults, a 290-litre boot and those four doors, of course. The rear doors are also rear-hinged, which improves access to the rear seats.

Whereas traditional engines use cylinders, the RX-8's rotary engine uses rotors to provide the power. The engine is a 1.3-litre unit considerably less than you would expect but it offers exhilarating performance.

It's fun to drive, provides a great soundtrack and has terrific handling. The ride is a bit firm at low speeds, but it smoothes out considerably as speeds increase.

The rotary engine provides impressive performance, but it does come at a price. Average economy is 26mpg on the less powerful version and just 24mpg on the 228bhp car. However, in real-world driving conditions, drivers will struggle to break 20mpg. CO2 emissions aren't any better, with the 189bhp car emitting 267g/km and the 228bhp version 299g/km.

Four adults can travel in the RX-8 in relative comfort. It might be a bit snug for those in the rear seats, but it's considerably better than other similarly priced coupes.

The specification on all RX-8s was generous. All cars get alloy wheels, climate control, electric windows and electric seats.

Our pick is the more powerful 228bhp version. The cheapest cars cost less than 1000 on the used market. Later models are also good value; we found one with 11,000 miles on the clock for less than 6500.

The RX-8 makes a great used buy, but there are some common problems to look out for, though:

Mazda RX-8 cracking heat insulator problem ('03)
Early models were recalled to replace heat insulation that could crack and fall off. The insulation was around the dynamic dampers, which are used to lessen vibrations from the engine entering the cabin. Cars with faulty insulation had them replaced with an improved version.

Mazda RX-8 fuel leak problem ('03-'04)
The largest recall of the RX-8 was for cars built between 2003 and 2004. More than 15,000 cars were recalled to fix a problem with the exhaust system that could cause a fuel leak. It was discovered that parts surrounding the exhaust could melt and the heat could affect the fuel tank. Mazda fitted an insulating heat pad to the fuel tanks of affected vehicles.

Mazda should have fixed all of these problems, but make sure the car you're considering has had the work done.

Deal of the Day: Mazda RX-8