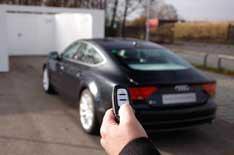 Piloted Parking
There are already systems that help with parallel parking, but Audi intends to take this further with a system that works in tight garages or car parks.

The driver will be able to get out of the vehicle, press a button on the key fob and watch the car park itself using ultrasonic sensors. The system stops the car if it senses an obstacle, such as a toy or a pet. It's also able to reverse and straighten up if it is heading in at an angle, or too close to a wall.

Once parked, the system closes the car's windows, turns off the engine and ignition, and selects Park before locking the doors.

This system, while advanced in its development, currently faces legal hurdles, because self-driving cars are illegal in Europe. Should this change, Audi hopes to create a system that can drive the vehicle into a multi-story car park, search for a space and then park in it.

Traffic Jam Assistant
The traffic jam assistant is based on the adaptive cruise control function already available in several Audis, which keeps the car a safe distance from the one in front.

This low-speed version is able to take control of stop-start driving while in a traffic jam, braking the car to a complete halt if required.

It also uses a series of sensors and a wide-angle camera to monitor the lane markings, guardrails and the line of the cars in front, making minor adjustments to the steering where needed.

It works at speeds of up to 37mph and Audi says it hopes to offer it really soon possibly as early as 2013.

Trailer Manoeuvring Assistant
This system helps the driver to reverse a trailer.

A simple sensor on the tow hitch tells the car what angle the trailer is heading in, and it automatically steers to keep everything heading in the correct direction.

The sensor calculates the size and length of the trailer by looking at the distance between the tow-bar and the trailers axle, and adjusts itself accordingly.

Unlike much of the other new technology that Audi is developing, this requires a large amount of driver input due to the lack of sensors on a trailer or caravan. It is controlled through the MMI dial on the central console, which allows the driver to determine the direction of travel for the trailer.

The sensor that drives the system is a small rubber ring that fits around the ball of the tow bar. Audi hopes to offer the system on vehicles such as the Q7, within four years.