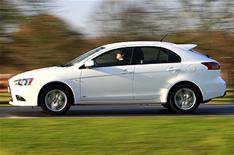 If there one type of car us Brits don't like, it's the small saloon which gave the Mitsubishi Lancer 4dr a problem. That's why we now have the Lancer Sportback, which gives us our Lancer fix in more palatable five-door form.

It's mated to a five-speed manual gearbox that's reasonably positive, if slightly heavy to move between gears, but you'll need to make frequent changes because the engine isn't exactly bulging with torque.

The Sportback makes a pretty comfortable, if noisy, motorway companion, but you'll be jiggled about on less-well-maintained roads, while the handling is bouncy and the grip is poor.

The plastics in the cabin are robust enough, if not exactly classy, and the controls are light and easy to use. The Sportback has decent legroom, too, but headroom and boot space aren't so good.

All models get air-con, electric door mirrors and electric windows all round, but base models don't get alloys.

Mitsubishi Lancer Sportback 1.8 GS2 Price (from) £13,966
On sale Now
Youll like Cheap to buy; roomy
You wont Not so cheap to run; noisy; dull