More for you |
Every 5-star car on What Car?Used test: Maserati Levante vs Porsche MacanNew issue of What Car? magazine on sale nowMost and least reliable small SUVsRevealed: the car makers whose discounts have got bigger since lockdown
Home
News
E-Class Cabriolet: a car for all seasons
news

E-Class Cabriolet: a car for all seasons

* It's got a cap and a scarf * All-weather comfort for four * Arrives in the UK in March... 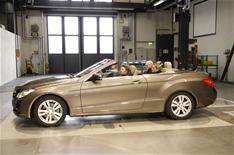 Mercedes-Benz's forthcoming E-Class Cabriolet will don a cap and a scarf, so that it can provide year-round comfort for four people.

The 'cap' and 'scarf' explained
The company's aerodynamic experts have devised something they call Aircap to channel oncoming air over the heads of every occupant, so that the cabin remains warm and free of buffeting even at speed.

The car will also be available with a development of the Airscarf system from the SLK and SL. This blasts warm air at neck height to the driver and front passenger through vents in the headrests.

'With this car we have extended the open-top season to all year round,' says Wolfgang Bremm, the car's senior product manager.

20 years of development
Aircap is something Mercedes has been working on for 20 years. It consists of a spoiler and mesh net in the top of the windscreen it's raised at the push of a button plus rear headrests joined by another mesh net that automatically go up and down when the spoiler rises and rear seatbelt buckle is fastened.

We've tried it in a wind tunnel facing a 90mph gale, and considering that, with the side windows up, it prevents almost any buffeting inside the cabin.

Dr Teddy Woll, the project's senior aerodynamics manager, says it has taken 2000-3000 hours of wind-tunnel work to develop. Even the size and shape of the holes in the two mesh nets had to be finely honed.

It was perfected with the help of a former tailor's dummy called Tanja, which, fitted with sophisticated probes, measures the amount of wind buffeting likely to be felt by the driver or passengers.

'Our aim was to create a warm air bath in the cabin and keep the heat from the climate system in the car for longer,' says Dr Woll.

More refinement and added efficiency
The system also has benefits for fuel economy and in-car noise levels, because there is less aerodynamic drag and flutter inside the car.

The latest Airscarf system has swivelling vents at the bottom lip of the front headrests, enabling occupants of any height to direct the warm airflow where they want it.

The E-Class Cabriolet will also have a seven-layer electrically-operated folding hood. It comes to Britain next March with a choice of seven engines already seen in other versions of the E-Class family, and Aircap will be standard on every model. Mercedes hopes to introduce it at prices 5% below those of the old CLK Cabriolet.

Check back next Tuesday for full details and pictures of the car, which makes its public debut at the Detroit motor show in January.