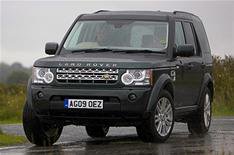 Land Rover has created 275 extra jobs at its Solihull factory to cope with soaring demand for its cars.

Extra agency workers are required after the firm revealed orders for its Solihull-built Discovery 4x4 were up 58% in March 2010, compared with the same month in recession-hit 2009.

Land Rover said the agency workers were on variable contracts, so it could employ more if demand continues to grow, but equally the agency jobs could go if sales aren't maintained.

Ranger Rover LRX
Meanwhile, Land Rover has revealed the first test models of its baby Range Rover the LRX have been built at its Halewood factory on Merseyside.

Full-scale production of the vehicle will create up to 800 new jobs at the factory ahead of the car going on sale in July 2011.

The LRX is expected to be one of the greenest SUVs on the market and will also be Land Rover's smallest and most-efficient vehicle.

Land Rover says it's aiming for CO2 emissions of less than 150g/km for all models, but a hybrid version that will achieve more than 60mpg and emit less than 120g/km of CO2 is also being developed.