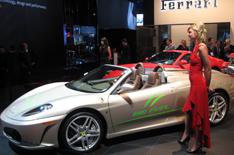 There were no new models from Ferrari, but it did reveal the outcome of recent tests on its cars with E85 biofuel - and with the company committing to reducing its carbon dioxide emissions by 40% by 2012, it knows it must act swiftly.

The good news is that it has already found that all its current models run without performance loss with 10% ethanol in their fuel tank, and without the need for mechanical modifications.

What's more, using a F430 Spider, which was on the Ferrari stand in Detroit, in tests, the company has also found that it can convert its cars to run on E85 bioethanol or normal fuel with only simple ECU and fuel feed system changes.

And better still, running on biofuel the car had 10% more power and 4% more torque, despite emitting 5% less carbon dioxide.

So where's the catch?

'At the present time we have no plans to put E85-powered Ferraris on sale,' said a spokesman.