More for you |
2012 Ferrari FF reviewDriven: Ferrari FFLong waiting list for Ferrari FFWATCH: 2020 Polestar 2 review – better than a Tesla Model 3?Cars that are cheaper to buy on finance than with cash
Home
News
Ferrari FF
news 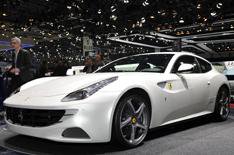 Ferrari just isn't what it used to be. Twin-clutch paddle-shift gearboxes have replaced open-gate manuals, multi-link rear suspension has taken the place of race-bred double wishbones and in the California there's even a folding metal roof in place of simple canvas.

Now there's this, the FF (Ferrari Four) that was unveiled at the Geneva motor show today. It has four-wheel drive and a four-seater body that has hints of Reliant Scimitar and BMW Z3 M-coup about it. It isn't the first four-wheel-drive Ferrari, but it is the first to make it into production.

It will be powered by a new 6.3-litre, 650bhp front-mounted V12 mated to a double-clutch semi-automatic gearbox on the rear axle, for better weight distribution.
Ferrari claims 0-62mph in 3.7 seconds.

The four-wheel-drive system, dubbed 4M, is said to weigh 50% less than conventional alternatives. It is fully integrated with the car's electronic stability systems and operates by varying the torque sent to each wheel according to the loads on them and the traction available.

The FF is claimed to be the most practical Ferrari ever, with genuine space for four people and a minimum 450 litres of luggage space. There will be a huge range of personalisation features to go with the high standard specification.