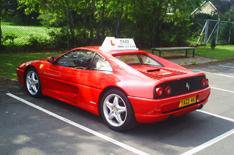 A driving school in Slough, Berkshire is offering successful candidates the ultimate treat for passing their test a passenger ride in a Ferrari.

Pupils at the Yazz School of Motoring who have paid for a minimum of five lessons are offered a ride in a Ferrari 360 Modena or F355 GTB.

'The ride typically lasts 30-45 minutes, and we encourage the pupil to let us take them past their school or workplace,' said a spokesman.

However, pupils are only allowed in the passenger seat as Yazz's insurance company doesn't cover new drivers.

The school is also developing a scheme to give rides to pupils who keep a clean driving licence for two years after passing their tests, as part of a safer driving initiative.