More for you |
10 most unreliable SUVsWhat Car?'s best cars for less than £250 per monthGuaranteed discounts on our 2020 Award winners - save up to £19,366Skoda Kamiq long-term test reviewWATCH: 2020 BMW 2 Series Gran Coupe review
Home
News
First look inside the 2015 Smart Fortwo and Forfour
news

First look inside the 2015 Smart Fortwo and Forfour

* Smart reveals new city cars, the Fortwo and the Forfour * We take an early look around the pair * Both go on sale later in 2014... 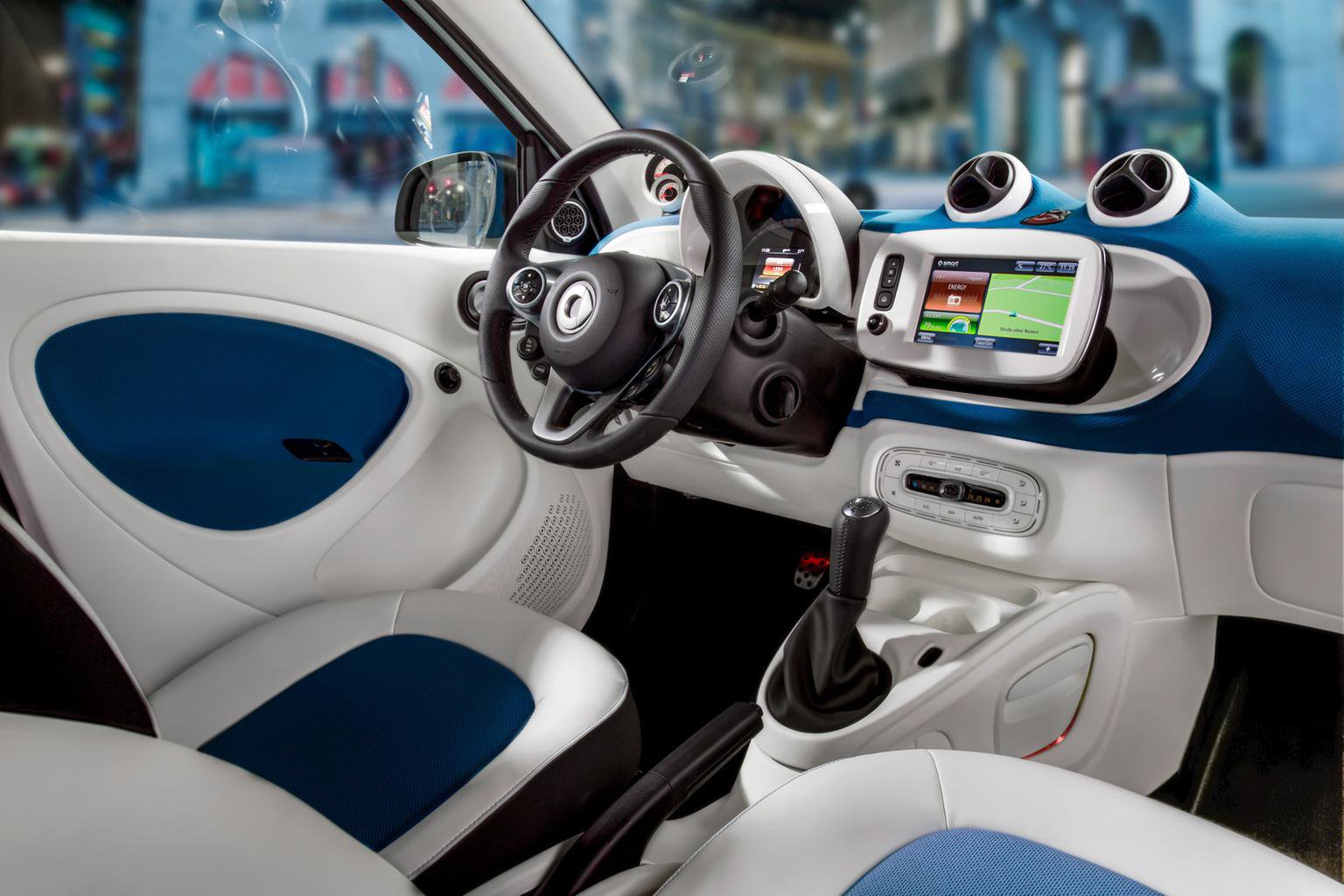 Smart has taken the covers off its all-new Fortwo and Forfour, with both cars going on sale later this year. We've had a chance to have a look inside the two cars.

Fortwo
The Fortwo's cabin is a vast improvement over the old version's, with a little more shoulder room (thanks to a 10cm increase in width) and a much funkier style. A large ovoid design stands out thanks to the contrasting colours, of which there are three available schemes – blue and white, and black with orange or white.

A combination of fake leather and a tactile, cushioned, rough-textured material across large swathes of the cabin and seats makes the whole thing feel funky and more upmarket than budget rivals such as the Fiat 500 and Hyundai i10.

Gloss plastic switches are also arranged in an oval shape around a retro-style sliding air-con switch, while a standard colour touch-screen set higher up runs unique software to Smart and creates the main focal point.

The driver’s seat is set quite high, which, together with doors that open to nearly 90-degrees for the biggest possible opening, makes for really easy access.

Once installed, the driver is faced with a single large dial in the binnacle behind the wheel. This contains a colour readout to show the vital information. Another retro design touch is the 'floating' speedo needle that moves round the edge of the dial. A rev-counter protrudes from the dash in its own housing.

While much of the switchgear and door handles are shared with the Renault Twingo with which the car has been developed, they do not appear out of place on what purports to be a more premium vehicle.

Forfour
The Fortwo’s platform is extended to form the underpinnings for the four-door, four-seat Forfour, which is now more of an extended Fortwo than a conventional city car. It also shares its platform with the new Renault Twingo.

From the driver’s point of view, the Forfour is virtually identical to the Fortwo, albeit a little wider.

It feels like a fairly radical design next to the established city car crowd, being narrower and slightly shorter, and with two individual seats in the back instead of the usual bench.

Those seats can either be folded down flat, or the seat base itself flips up and over in an easy one-handed move to reveal a deep, flat storage area. The central cubby also slots out if you need the full width of the back seats to load a bulky item.

The rear passengers get the same benefits as those in the front, with the wide-opening doors and high seats again making access really easy; two normal-sized adults should be fine, if a bit cosier than in some rivals.

A cloth cabrio roof, which will be available as an option midway through 2015, is a neat touch, but does impinge on headroom, which is already slighty tight for adults.

Read more about the new Smart Fortwo and Forfour.