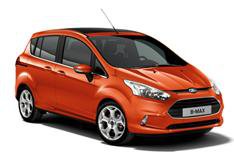 The Ford B-Max has been revealed, ahead of its public debut at the Geneva motor show 2012.

The B-Max compact MPV was revealed as a concept car at the Geneva motor show 2011. The production version is all but identical, with the addition of door handles, an extra quarterlight and different light lenses and front grille trim the only noticeable changes.

The B-Max is based on the same platform as the Fiesta, but has a taller, longer body that provides greater practicality. Unusually, the B-Max has sliding side doors and no central pillar, to provide easy access to the rear seats.

Extra strengthening in the door itself, in the floor and through the roof compensates for the lack of a B-pillar. Ford is confident the B-Max will achieve a full five-star Euro NCAP crash rating, despite the lack of central pillars: 'We wouldn't have done it otherwise,' said designer Stefan Lamm.

Fords new three-cylinder 1.0 Ecoboost engine will be available for the B-Max. In the Focus, this engine gives CO2 emissions as low as 109g/km, so it should be at least as efficient in the B-Max. Diesel engines from the Fiesta range will also be available.

The B-Max goes on sale in September. Prices are likely to start at around 13,000, in line with key rivals' such as the Citroen C3 Picasso, Nissan Note and Vauxhall Meriva.