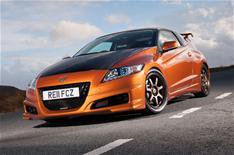 Honda has released the first pictures of a new high-performance CR-Z Mugen coupe.

The company says that in early tests with a mid-tune engine the hybrid coupe has posted Civic Type R 0-60mph times of around 6.6 seconds. There's more power to come before it makes its debut at the Goodwood Festival of Speed in July, however.

Power will increase by a further 15% from the mid-tune car, which will make the hybrid faster than the Type R.

As well as more power, the Mugen is 50kg lighter than the standard CR-Z, the expensive carbonfibre bonnet accounting for a significant proportion of this.

In Mugen driving mode fuel economy is around 35mpg, says Honda, around 4mpg better than the Civic Type R. The car's standard driving modes are retained, however, which means it can still better 50mpg on the official test cycle in eco mode.

Honda has heavily hinted that the car will be available in small numbers with a much higher price than the standard 17,695 model.