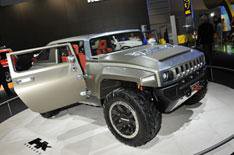 Hummers have always been something of a rarity on British roads, but they could soon be rare everywhere.

Sales have plummeted by 60% in the company's back yard in the USA in the face of the growing economic crisis, and some are predicting the company's downfall.

Don't despair just yet, though - instead get on down to Hummer's stand and marvel at the HX concept car and H3 and H2 production models.

However, the production version is unlikely to feature the more outlandish aspects of the concept car, such as the removable roof panels and bumpers.

Power comes from an E85 biofuel-compatible 3.6-litre V6 unit that drives though a six-speed automatic gearbox and four-wheel-drive system.

The HX's short wheelbase is said to give it impressive off-road ability, with company officials saying it can climb a 60% gradient.

The H2 and H3 are from the classic Hummer mould, which means they're big, brash and have fuel economy figures to make your local petrol station manager put in an emergency order for an extra delivery.