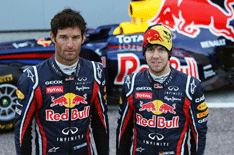 Infiniti is being tipped to use its electric car know-how to help develop an energy recovery system for the Red Bull Racing Formula One team.

The team, which uses Renault engines, is leading both the drivers' and constructors' world championships after Sebastian Vettel won three of the first four races of the season.

However, the team's performances have been compromised by repeated failures of its self-developed KERS energy-recovery system prompting the speculation that it will turn to team sponsor Infiniti for help.

'There are long-term goals for the partnership to go beyond that of a straight sponsorship deal and enter a sharing of engineering information,' said an Infiniti source.

Infiniti is part of the Renault-Nissan alliance, which is currently taking a lead on electric road car production. The Nissan Leaf was the first mass-produced electric car to make it to market, while Renault will launch four electric cars over the next 18 months.

Vettel recently hinted at Infiniti playing a greater role in the team's development, saying: 'The partnership is still very fresh, but it is a relationship that will grow in the long-term. They can be a strong partner for us.'