More for you |
Jaguar E-Pace vs Jaguar F-Pace: which is best?It it right for dealer to keep a used car's registration document for months? Will my car be able to run on the new E10 petrol? UK’s first electric car charging forecourt to openBMW X7 long-term test review
Home
News
Infiniti M35 hybrid driven
news 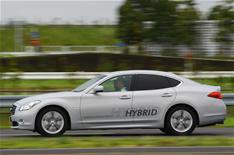 By this time next year Infiniti will be in the unique position in the UK executive saloon market of being able to offer petrol, diesel and hybrid powertrains.

It's quite a feather in the cap of a company that has operated in the UK for less than a year and that sells only penny numbers.

The car in question is the new M, and it is Infiniti's first hybrid. To be honest, it isn't primarily aimed at Europe, though. It's a car for America, the Far East, Russia and the occasional country such as Switzerland where diesel enjoys the same kind of popularity as BP currently does on the Gulf of Mexico.

Still, Infiniti reckons it could do well here in the UK, possibly claiming 40% of M sales. For one thing, it will have better performance than either the 3.0-litre diesel (M30d) or 3.7-litre V6 petrol (M37) models. It will also have the lowest CO2 emissions comfortably below 200g/km although it will also be the most expensive, possibly as much as £5000 more than the corresponding M37.

The strange thing is that we're being allowed to drive it now, before the V6 petrol, which has just gone on sale, or the diesel that arrives in October. When we say 'drive', we should perhaps point out that it was only for a short time around a test track in Japan. The hybrid won't actually be available until next spring, and engineers are still working on finalising the production version.

Still, the powertrain is the real deal but for a bit of final tuning of the software that controls the gearbox. It combines Infiniti's old 3.5-litre V6 petrol engine, developing 303bhp, with a 67bhp electric motor. There's nearly 200lb ft of torque at around 1000rpm from the electric motor, and 259lb ft at 5000rpm from the V6. Why not the newer and more powerful 3.7-litre engine? With the additional clout of an electric motor, Infiniti says the 3.5 does more than nicely.

There's a twin-clutch seven-speed auto gearbox instead of one with a torque converter, cutting fuel consumption by up to 10%, while a new electronic power steering system helps to save another 2%.

Infiniti reckons you can drive for about a mile-and-a-quarter at speeds of up to 50mph using only the electric motor, but we reckon you'll need to treat the throttle like a landmine to do so. The system is gorgeously smooth, though, and it propels a hefty car (120kg more than the as-yet-undeclared weight of the M37) with some vigour. There's no delay when you want to get going, either. With no torque converter to slow response times, the powertrain's reactions are close to instantaneous. It's refined, too, with just enough V6 crackle when you really stir the engine into life.

You're aware of the car's weight and not-inconsiderable size when you ask it to change direction at more than 4.9 metres, it's closer in length to standard-wheelbase limos than other executive saloons but let's not dwell on how it rides and handles right now, because the set-up will be changed for Europe. As it stands it's more of a gobbler of motorway miles than a car to have you seeking out short-cuts. The steering feel is artificial, but the weighting does change as you turn the wheel to let you know you're loading the front tyres.

It's a handsome car from just about every angle, and if the style of some trim is more American or Oriental than European, few will quibble about the feel of it, or the interior layout. Space in the rear isn't exactly generous given the car's size, and you lose a portion of the boot to the batteries, but Infiniti says it passes the two-golf-bags test. The batteries are of the lighter lithium-ion variety, so there shouldn't be the payload issues you get with the Lexus GS450h.

All in all, it feels a good effort, particularly if your interest is in fast motorway expresses rather than sports saloons. It will come only in luxurious GT spec and be loaded to the rafters with kit, including some safety items denied most of the grandees of the executive car world, and you'll be looked after like royalty by the (currently sole) UK dealership. At least there'll be a couple more by the time it goes on sale.

As a business express, it has a lot going for it