Infiniti Q30 concept due at Frankfurt

* Concept for new Infiniti Q30 set to appear at Frankfurt * Previews Infiniti's new hatchback * Due to be built in Sunderland, on sale in 2015... 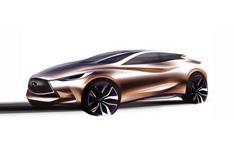 The concept car for the Infiniti Q30 will be displayed at this year's Frankfurt motor show.

The Q30 concept will be the first indication as to the look of Infiniti's upcoming small premium hatchback, which is intended to compete with the likes of the the Audi A3 and BMW 1 Series.

The concept car will take styling cues from the likes of the Etherea, which was first shown at the 2011 Geneva motor show.

The finished version of the Q30 is not due to go on sale until 2015, and the production car is not expected to be revealed for at least another year, with the 2014 Los Angeles motor show a likely location for its global debut.

When it goes on sale it is likely to be priced to be competitive with the likes of the Audi A3, BMW 1 Series and Mercedes A-Class, meaning prices are set to start just under 20,000.

More images of the Infiniti Q30 concept are expected to be revealed ahead of the Frankfurt show.