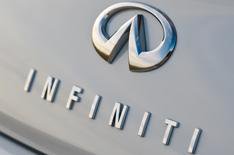 Small-capacity petrol and diesel engines and a compact car to rival the Audi A3 and BMW 1 Series are part of Infiniti's plans to reduce the average carbon footprint of its range and make it more appealing to European buyers.

Engine deal
The four-cylinder petrol and diesel units will be supplied by Mercedes-Benz following the recent deal between Daimler, the parent company of Mercedes and Smart, and the Renault-Nissan Alliance, which includes Infiniti. In return, Infiniti will sell its next-generation V6 and V8 petrol engines to Daimler.

The G saloon will be the first Infiniti to be Mercedes-powered, but not until a replacement model comes along in two to three years. Then Infiniti will have a car to take on the BMW 320d in the UK's all-important business market.

If it comes it is almost certain to be front-wheel drive, whereas the entire current range has either rear- or four-wheel drive. Infiniti has admitted that the compact electric car it is working on, for launch before the end of 2014, will be driven at the front, using the powertrain of the all-electric Nissan Leaf, which goes on sale at the end of this year.

Petrol-electric hybrid
Earlier this year Infiniti launched its first diesels when it slotted a 3.0-litre V6 into the EX crossover and the big FX off-roader, and next year it will launch its first petrol-electric hybrid in the M, a BMW 5 Series-sized saloon. The hybrid will have an engine stop-start system, which will eventually become uniform in the majority of Infinitis, says Palmer.

Infiniti has no plans to create a green sub-brand such as BMW's Efficient Dynamics or Mercedes' Blue Efficiency, however. Palmer says green drive systems will simply be slotted into cars as they are updated or replaced. 'At heart we remain a performance brand,' he says.