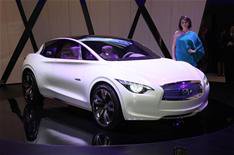 Speaking at the launch of a new showroom in Stockport, Bernard Loire, vice president of Infiniti Europe, told What Car? that the huge expansion will be driven by the combination of a wave of new models, an expanded dealer network and a push to promote brand awareness.

Infiniti is Nissans prestige brand and Nissan hopes to make it as successful in Europe as Toyota has done with Lexus. 'There is a space for us,' said Loire.

The 'awareness drive' has begun, Loire says, with TV adverts and Infiniti's association with the Red Bull Racing Formula One team and its world champion driver Sebastian Vettel.

In addition to the new Stockport sales centre, a new Infiniti showroom opens in Leeds this week, taking the overall number to six in the UK. Infiniti aims to have at least 10 operational by 2015.

The product initiative will focus on new models or derivatives designed specifically for Europe.

There are no new models planned for 2012, but in 2013 a new G series saloon will be launched. As with the current car, it'll be a rival for the Audi A4 and BMW 3 Series, but will be slightly larger than both. Sales of the current car are low, but Infiniti hopes the next model will be more appealing, thanks to the addition of four-cylinder diesel engines.

The same engines will be added to the M Series saloon in 2013, which will allow it to compete with four-cylinder diesel versions of the Audi A6 and BMW 5 Series. The four-cylinder diesel engines are supplied by Mercedes, as part of the agreement between Mercedes and Renault/Nissan.

In 2014, Infiniti will launch an all-new small saloon, which will be powered by an electric motor. It'll share its technology with the Nissan Leaf, but will have entirely different interior and exterior styling.

The major sales push will come from what Infiniti insiders call its 'A3 fighter' a new compact model that will be a rival for the Audi A3 and BMW 1 Series. It will be launched in 2015 and its styling will be heavily influenced by the Etherea concept car's that made its debut at the Geneva motor show in 2011 and will share its basic platform and engines with the new Mercedes B-Class.

A new sports car is also possible. Infiniti will unveil a mid-engined concept car at the Geneva motor show in 2012, which is likely to feature range-extender technology and could make it to production.

Meanwhile, production of the Infiniti FX Vettel Edition - which was unveiled at the Frankfurt motor show in September - has been confirmed. It is due to go on sale during 2012.