* Fastest Jaguar ever * Record set at Bonneville * XJ220 supercar was fastest before... 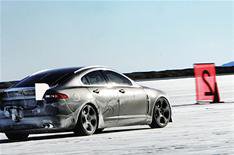 The car, driven by racing team owner Paul Gentilozzi, had a remapped ECU and supercharger modifications - taking power to 600bhp.

The XFR was also fitted with a larger rear wing to aid aerodynamics.

Jaguar's previous speed record for one of its cars was held by the XJ220 supercar.