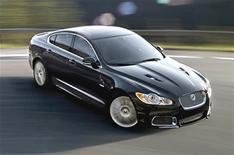 Behold the Jaguar XFR the most powerful iteration of our current Car of the Year winner so far.

The XFR is powered by a 505bhp supercharged V8 engine. It is identifiable by its lower and wider front end, bonnet louvres, sill extensions, rear bumper valance and boot spoiler and 20-inch 'R' wheels.

It also has firmer suspension and quicker steering than the rest of the range, an electronic differential to improve agility and stability and electronic 'adaptive' damping to improve body control and give the cars a more sporting character,

Other features include special leather-trimmed seats, dark oak and dark mesh aluminium dash cappings, and different dials to other XFs.

The engines produce more power and pulling power than those they replace, yet bring down fuel consumption and emissions significantly. In the XF, the diesels lower company car tax ratings by four bands.

All XFs also have new door mirrors, a device to prevent mis-fuelling on diesels and an acoustic laminated windscreen, and turn-by-turn navigation instructions are now displayed in the instrument cluster.

The six-speed ZF automatic gearbox has had to be beefed up to cope with the higher torque levels of the new engines, and there are improvements to chassis, brakes and electronic safety systems.

XFR-S?
However, as you revel in its performance and luxury, bear in mind that there are already rumours of an even more extreme version of the saloon in the pipeline, slated to be called the XFR-S.

The XFR-S is reported to be a much wilder looking Jaguar, sporting wings, air dams, slots and skirts, all in the name of improving stability.

However, it is likely to share the same engine and mechanicals of the XFR you see here today.