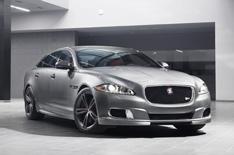 The Jaguar XJR will make its debut at the New York motor show later this month.

Few details have been released, but it is known that the XJR will be powered by a 543bhp 5.0-litre supercharged V8 engine. Jaguar has also revealed that it sits on a bespoke chassis.

Performance and economy figures will be released at the show, but expect a 0-60mph time of less than 4.5 seconds and a price tag of more than 100,000.

Jaguar's teaser image of the XJR shows a subtly restyled front air intake and R badge on the grille.

Joining the XJR on the company's stand in New York will be the Jaguar F-type and all-wheel-drive versions of the XF and XJ saloons.