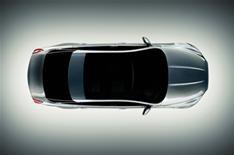 This is the first official photograph of Jaguar's next-generation XJ luxury saloon.

The tantalising aerial shot, released at the Shanghai motor show, reveals a panoramic glass roof, a heavily sculpted bonnet and what appears to be a blacked-out rear pillar.

Jaguar has suggested that the XJ will be an even bigger break with tradition than the XF and this teaser photo seems to confirm that.

Full details of the car, including prices, will be revealed in London on July 9. The order book will also open then, with deliveries starting in early 2010.

The all-new XJ is the first car to feature the next generation of Jaguar's aluminium body construction and will come in standard- or long-wheelbase models.

All of Jaguar's new petrol and diesel engines will be available in the new XJ, including the 3.0-litre V6 diesel and 510 bhp supercharged V8.

A website, www.jaguar.com/allnewxj, has been set up where people can register to receive further information as it is released.