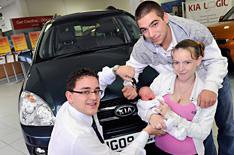 The family of the baby born in a Kia Carens, and named after her birthplace, today picked up a brand-new seven-seat MPV, courtesy of Kia Motors.

Samantha Smyth, 23, was on her way to hospital in her mother's Carens, and had reached the car park, when her baby decided to make her appearance.

Although her parents had planned to call the little girl Tilley, they decided to name her in honour of her place of birth, and she's now called Kia.

What Car? saw the story in the Bournemouth Daily Echo and alerted Kia Motors, who stepped in with an unusual new-baby gift: a new, top-of-the-range seven-seat Kia Carens, worth 17,995.

Samantha, 23, told What Car?: 'I was totally gobsmacked when I heard the news I didn't know what to say except thank you!'

Samantha and her partner Tony have six children between them, so fetching and carrying them had become a logistical nightmare in a four-seat BMW.

'Now we can fit all the kids in the car and won't have to organise so much babysitting when we're collecting them,' said Samantha. 'It's going to make our life a lot easier.'

'Our old car has been playing up recently, and I'd said to my mum I wouldn't mind getting a Carens myself. Now we've got one and little Kia did it all herself!'

Michael Cole, managing director at Kia Motors (UK) Ltd, said: All of us at Kia are delighted for Tony and Sam, and flattered that they have called their new baby Kia. We know how good the Carens is for families especially growing ones - so we thought we should help them out by giving them a Carens of their own!'