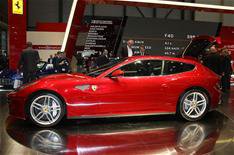 The new Ferrari FF already has a waiting list of 12-18 months, What Car? has learned.

The Ferrari FF, formally launched at the Geneva motor show is the first-ever production four-seat, four-wheel-drive model from the Italian marque, and replaces the Ferrari 612 Scaglietti.

Ferrari has capacity to make 800 FFs a year, but following recent test sessions with current Ferrari customers, more than 1000 orders have already been placed.

The sales figures represent an immediate boost for Ferrari, which sold 3000 612 Scaliettis during the cars seven years on sale an average of less than 500 a year.

Prices have yet to be formally confirmed, but are expected to be around 220,000.