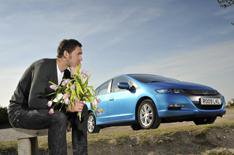 Some people THINK Im a bit of a skinflint, but thats probably because I hate waste of any kind. So, the idea of a hybrid that would wring the maximum efficiency from every gallon of unleaded, as well as taking the edge off my carbon footprint, sounded like a top idea to me.

Everything seemed rosy when I collected our Honda Insight in April 2009 from Chiswick Honda (0845 338 6145), where sales adviser Nozomu Tokunaga did the handover. The Insight is the most affordable hybrid car to date, at just 15,490 for the entry-level SE version that I went for. Standard kit includes air-con, an auxiliary socket, stability control, six airbags and alloys, so the only option I added was metallic paint, at 372.

The major attraction, of course, was the Insights claim to be green. This comes courtesy of Hondas Integrated Motor Assist (IMA), which combines an 87bhp 1.3-litre petrol engine with a 13bhp electric motor, a stop-start function and a system that uses the energy created under braking to charge the battery. The Insights low weight and aerodynamic shape also help towards an official average of 64.2mpg and CO2 emissions of just 101g/km.

You can also press a button to engage Econ Mode, which alters the engine= management, air-con system and regenerative braking to optimise fuel efficiency.

Early promise
Things got off to a good start: according to the trip computer, the Insight averaged around 50mpg on a return trip from London to Devon via Brighton. Not bad, but well short of the official 64.2mpg figure. Even so, I reckoned things would improve as the engine loosened up.

So much for my high hopes. Over the year, things got worse, ending up with an average of just 44.8mpg. Thats almost 20mpg less than the official figure, or roughly 30% short. Not only was this bad news for my pocket, it was bad for the environment, because CO2 emissions would be a similar proportion higher than claimed.

Motorway trips tended to give the best economy, although if group production editor Euan Doig was particularly eager to get home on the M40 the result would be a shocking figure of 35.5mpg.

How do I explain the overall shortfall? Well, the Insights powertrain might be fine on the equipment used to calculate official figures, but in the real world it struggles. Its perky enough in town, but elsewhere the shortage of torque and the Continuously Variable Transmission (CVT) automatic gearbox mean the engine is often revving hard to achieve decent pace. The hills of Devon and Dorset really brought this home, but the problem is equally annoying on the motorway, because you need constant heavy pressure on the accelerator pedal just to maintain normal cruising speed.

Unfortunately, the rest of the driving experience was equally disappointing. The steering was numb at speed, which did little to inspire confidence on blustery winter motorway journeys. However, the steering was also light, which proved vital for parking outside my house, where spaces tend to be tighter than Russell Brands trousers.

I could just about disguise the annoying amount of engine- and road noise by turning up the stereo, but I never got to grips with the Insights poor ride. Despite its cushioning high-profile tyres, the suspension shuddered over even the smallest bumps and fidgeted constantly on the motorway: thats unforgivable in a family runabout. The issue was compounded by the seats, which seemed short of padding and which I could never get into quite the right position.