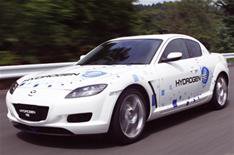 Mazda was leasing hydrogen-powered cars in Japan as long ago as 2006, but the company is now also heavily involved in Norways national hydrogen project (HyNor), which has been set up to test hydrogen in the transport sector in Norway.

HyNor is building an initial hydrogen infrastructure, as part of a future permanent set-up, so that it will be possible to drive hydrogen-fuelled vehicles along the 580km route between Oslo and Stavanger.

As part of its commitment to the project, Mazda has developed a dual-fuel RX-8 coupe that can run on both hydrogen and petrol.

Mazda admits that such an engine is not as efficient as a fuel cell, but because it shares so much with the conventional petrol engine, the development costs are much lower, and there are fewer issues with reliability.