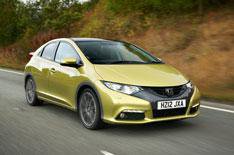 What is it? This will be the strongest petrol version of the new Civic hatchback when it goes on sale in January.

The engine is related to the 1.8 in the outgoing Civic, but power is fractionally up, and its now capable of returning a highly competitive 48.7mpg up from 42.8mpg.

We've already driven the 2.2-litre version of the new Civic and were very disappointed with it.

Whats it like to drive? Pull away, and it quickly becomes obvious that the engine is relatively short on low-down muscle compared with the turbocharged petrol units in rivals such as the Ford Focus and Volkswagen Golf.

To really get the best from it, you really need to rev it. Theres an obvious step-up in performance when you hit 3500rpm, beyond which acceleration is seriously lively.

True, the engine drones a bit at a steady motorway cruise, but the road noise that the Civic generates is far more intrusive.

As with all versions of the latest Civic, Honda has tried to make the car easier to live with by sacrificing some agility in the search for comfort. The ride can still feel unsettled over broken surfaces, but its more supple than the 2.2 diesels, and the petrol car turns in to bends more sharply thanks to its significantly lighter engine.

Whats it like inside? The dashboard is easier to use than the outgoing Civics, but as before, the top of the steering wheel can obscure the speedo and some of the displays reflect in the screen at night.

Rear visibility is an even bigger issue; while the rear spoiler is narrower than the one on the outgoing car, it still cuts across the screen, and the cars thick rear pillars leave large blindspots that can make motorway lane changes nerve-wracking.

Theres plenty of legroom, whether youre sitting in the front or the rear, but front headroom is extremely limited (our range-topping EX GT car wasnt helped by its standard panoramic glass roof).

Luggage space is far more impressive. The boot has a 470-litre capacity, which is 120 litres up on the VW Golfs. Whats more, the rear seats can be either folded flat or flipped up like cinema seats when you need to carry even larger loads.

Should I buy one? Weve still to try the 1.4-litre petrol Civic, but this 1.8 is the pick of the models we've already driven, because it rides and handles better than the 2.2-litre diesel and is significantly cheaper to buy. Alternatively, you may want to wait for until late 2012 when there will be a 1.6-litre diesel that emits less than 100g/km of CO2.

We just wish the Civics front headroom, rear visibility and refinement werent so poor. Ultimately, its these failings that prevent it from challenging the class leaders.