BMW has made a radical change for the new 1 Series, now sending power to its front wheels to help fix its major flaw: practicality. And yet we’re told this doesn’t make it any less sporty to driv...

All-new really means it here, with the 1 Series having changed from rear to front-wheel drive.

The A-Class is a top all-rounder; like the 118d, this diesel version is aimed at company car drivers.

The internet has the memory of an elephant. And the problem with that is some things you wish were long forgotten have a nasty habit of popping up and biting you. For instance, you can find plenty of old adverts championing BMW’s famous rear-wheel drive philosophy. This, the company boasted, was the reason its cars were a cut above the flaccid front-wheel-drive competition.

And so, from its inception, the 1 Series was rear-wheel drive. Sure, that created problems, leaving it comparatively short on interior space, but so what? With BMW’s strapline being ‘The ultimate driving machine’, that was deemed a price worth paying. Until now. Yep, in a complete reverse ferret, the third-generation 1 Series is – you guessed it – front-wheel drive.

Rather predictably, then, BMW says it’s now much bigger inside, but also that moving the driven wheels forward hasn’t sacrificed it dynamically after all. Really? Not a jot? To find out, we’re pitting it against its nemesis, the Mercedes-Benz A-Class.

Each is in a spec well suited to company car drivers, with a frugal, 148bhp 2.0-litre diesel engine and an automatic gearbox. They’re also in their respective range-topping trim levels, so they have a few luxury items thrown in as well. 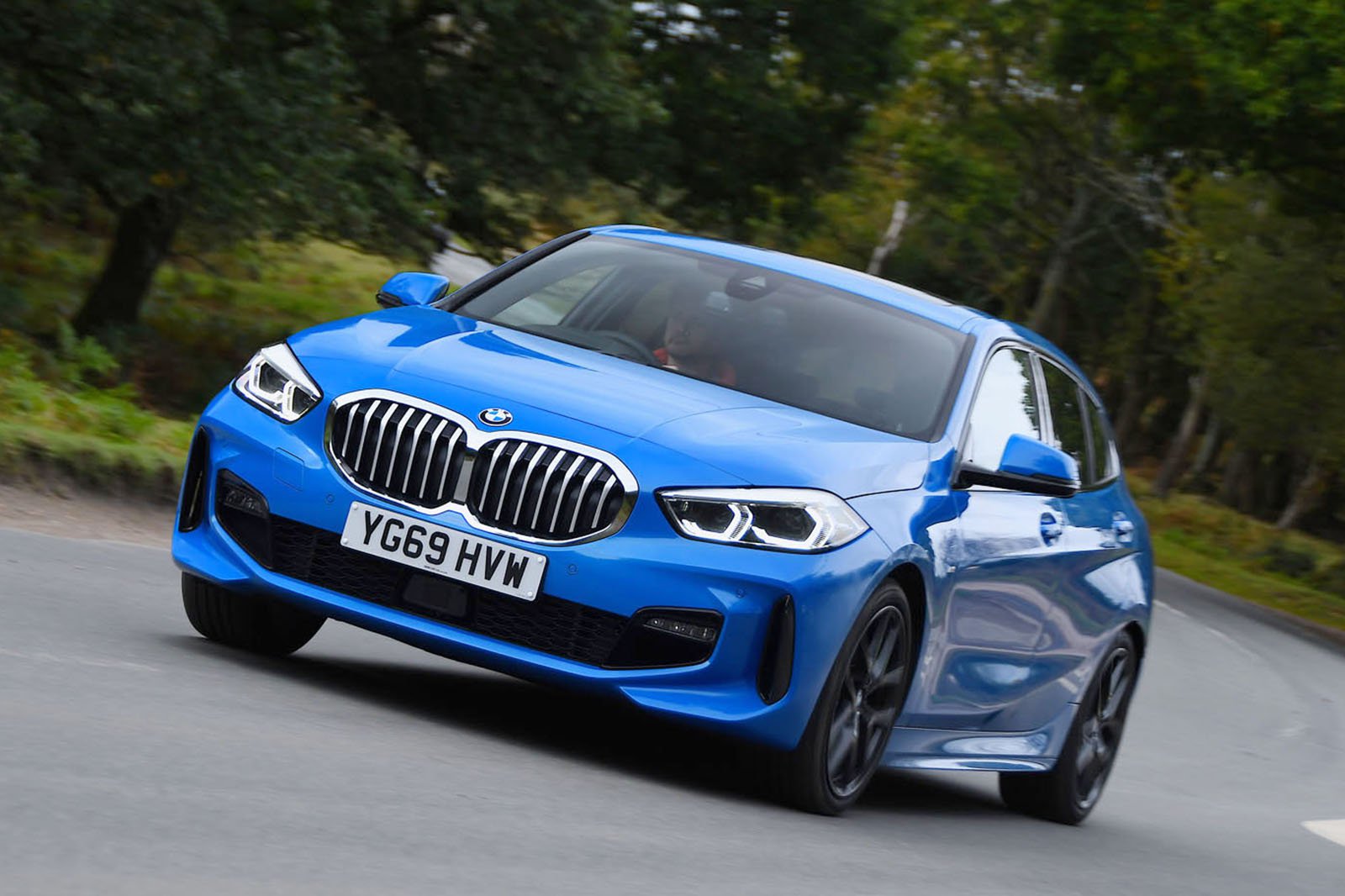 Both cars are usefully brisk away from the lights and have plenty of verve in reserve for motorways as well. Yet the A200d is a bit faster and builds speed more easily. “Why is that,” you might be wondering, “when they have identical power and the 118d has more torque?” Well, lots of torque is a bonus; it’s the muscle strength of an engine. With more muscle, it can build speed easily without needing to be thrashed. But it’s just as important to have that strength spread evenly across the engine’s rev range, so that you’re able to use it more often.

To make sense of that, think of torque like pâté on a slice of toast. Spread evenly, as it is in the A200d, you get a nice meaty burst with every bite. Take a bigger dollop but concentrate it in a narrower strip down the middle of your slice and there’s nothing to start with, then a powerful kick of flavour, followed by nothing again. That’s the 118d and why it isn’t as punchy at lower or higher revs. 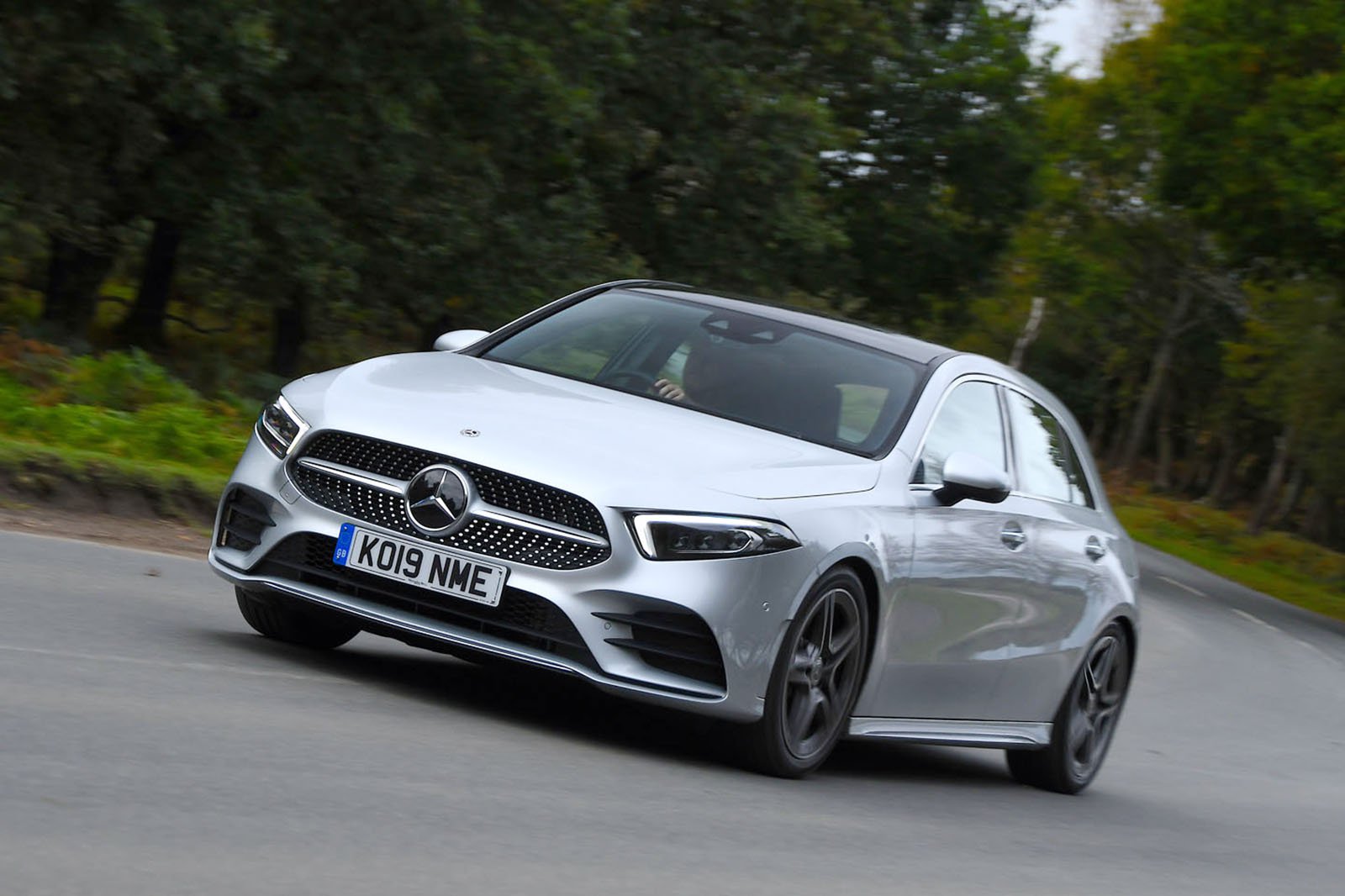 It’s swings and roundabouts, though. Both automatic gearboxes change quickly, but the 118d’s is better harmonised with its engine; it has a cannier knack of being in the most appropriate gear most of the time. The A200d’s fumbles occasionally to grab the ideal gear, plus it’s jerkier when pulling away. That makes it harder to drive smoothly in traffic and a darned sight more nerve-wracking to edge out of a tight parking spot.

The 118d’s engine emits a deeper yet more distant rumble that’s fractionally less intrusive than the A200d’s higher-pitched clatter. The contrast is sharper in slow traffic. At idle, there’s more noise and vibration inside the A200d, and its engine stop-start system operates with a shudder, whereas the 118d’s is comparatively seamless.

You’d need the hearing of a tawny owl to notice either engine at 70mph, but the 118d just pips the A200d for peacefulness in other ways. Both cars produce more road roar and wind noise than the Volkswagen Golf, but the bluster in the 118d is focused mostly around the door mirrors, while it’s stereophonic in the A200d, coming from the mirrors as well as the rear side windows.

On top of that, the A200d emits louder twangs from its suspension over bumps in the road, although it does actually have a softer ride. You get the most benefit from that on gently undulating motorways or A-roads, where it’s appreciably calmer than the tautly sprung 118d M Sport (lesser Sport trim gets you a more relaxed setup). The flipside is that the A200d isn’t as well tied down, so you notice your backside bouncing off the seat more often when the road is really bucking.

Oddly, the A200d isn’t a whole lot smoother than the 118d across broken town asphalt; it deals with initial impacts better but needs more time to compose itself after the disruptive calluses have gone.

Most will find the softer A200d comfier overall, but there’s no doubting that the 118d tickles the fancy of enthusiastic drivers more. Its steering is quicker than that of the A200d, so it’s far more eager to scamper towards apexes, and, with much less lean and a more playful balance, it changes direction with greater alacrity while feeling more fun. Don’t write off the A200d, though, because it grips just as hard, is perfectly capable and is more relaxing to drive, thanks in part to its slower steering.