* BMW 3 Series GT due on sale this summer * Hatchback with raised driving position * Longer and more spacious than 3 Series Touring... 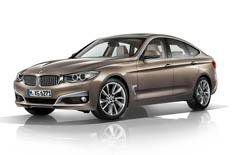 This is the BMW 3 Series GT, a new hatchback version of the popular executive model that's due on sale in the UK this summer.

The 3 Series GT will sit at the top of the four-model line-up, for while much of its styling and feature list will look familiar to owners of the coupe, saloon and Touring, it sits on a longer rear-drive chassis than any of them. BMW says the car will offer more space for rear passengers, an elevated driving position and the improved practicality that comes with a hatchback opening.

The 3 GT is 20cm longer and 8cm taller than a 3 Series Touring, and its wheelbase grows by 11cm. The seating positions (front and rear) are raised by 6cm BMW claims this makes it easier to get into and out of the vehicle and rear legroom is increased by 7cm over the 3 Series saloon and Touring.

With the rear seats in position, the luggage capacity is 520 litres around 25 litres more than the 3 Series Touring's load space. It's also the same capacity as the 5 Series saloon, a vehicle that's equally likely to be on the 3 GT buyer's shortlist. With the 40:20:40 split seat folded, the 3 GT's capacity is 1600 litres.

Handles at either side of the LED-illuminated boot will fold down the rear seat backs although the backrests can also be adjusted if required (through 15 stages, and 19 degrees) to alter the boot shape and capacity. The huge rear glass door operates electrically and is activated by either the keyfob or a button on the edge of the hatch. However, an optional sensor also allows you to open it by waving a foot under the rear bumper.

The exterior styling gives the 3 GT a more sporting stance than BMW's previous attempt at this type of vehicle the poorly received 5 Series GT. The current 3 Series' sharp nose is retained, and the extra length has allowed BMW's designers to make a decent fist of disguising both the increased height and the larger amount of metal beyond the rear doors.

The rear hatchback does hold one secret, though; an integrated spoiler that pops up at speeds of more than 68mph. BMW claims that it reduces lift on the car's rear axle by more than 35%, allowing the car to keep the same aerodynamic qualities as the 3 Series saloon.

Inside, the fascia and driver area are easily recognisable as a 3 Series, with a similar dashboard layout to the saloon and Touring, and familiar BMW touches including the iDrive infotainment controller and a head-up display.

A six-speed manual transmission with engine stop-start will be standard on all models, but an eight-speed automatic gearbox will be available as an option. A 'sports automatic', with sharper shifts and steering wheel-mounted paddle controls, will also be offered.

The first 3 Series GTs will head to customers on June 15.