Plush estates make great family cars, with the latest to join the club the new BMW 5 Series Touring. But how does it compare to its two most competitive rivals?...

The BMW 5 Series saloon is our Car of the Year, so we have high hopes for this estate.

Serious badge credibility with a proven ability as a load-lugger; it should be tough to beat.

The V90 isn’t the biggest estate in the world, but in sporty R-Design trim it certainly looks good value.

“Two's company, three’s a crowd,” or so the saying goes. But when it comes to spending your hard-earned cash on something as lavish as a luxury estate car, frankly, the more choice the better.

So, we’ve assembled three estates that represent the crème de la crème of the breed, starting with the all-new BMW 5 Series Touring. More efficient, faster and roomier than its predecessor, it’s sure to be a contender, not least because it’s based on our 2017 Car of the Year, the BMW 5 Series saloon.

Except that it’s up against the Mercedes-Benz E-Class Estate. This formidable rival has, throughout its iterations, provided Middle England with a surplus of grace, space and pace, and this latest model is no different.

And how could this luxury estate trio be complete without that supposed antique dealers' favourite, a Volvo? Yet there’s nothing turn-of-the-century about this new V90; it’s the very embodiment of contemporary Swedish design, and it undercuts its German rivals on price. 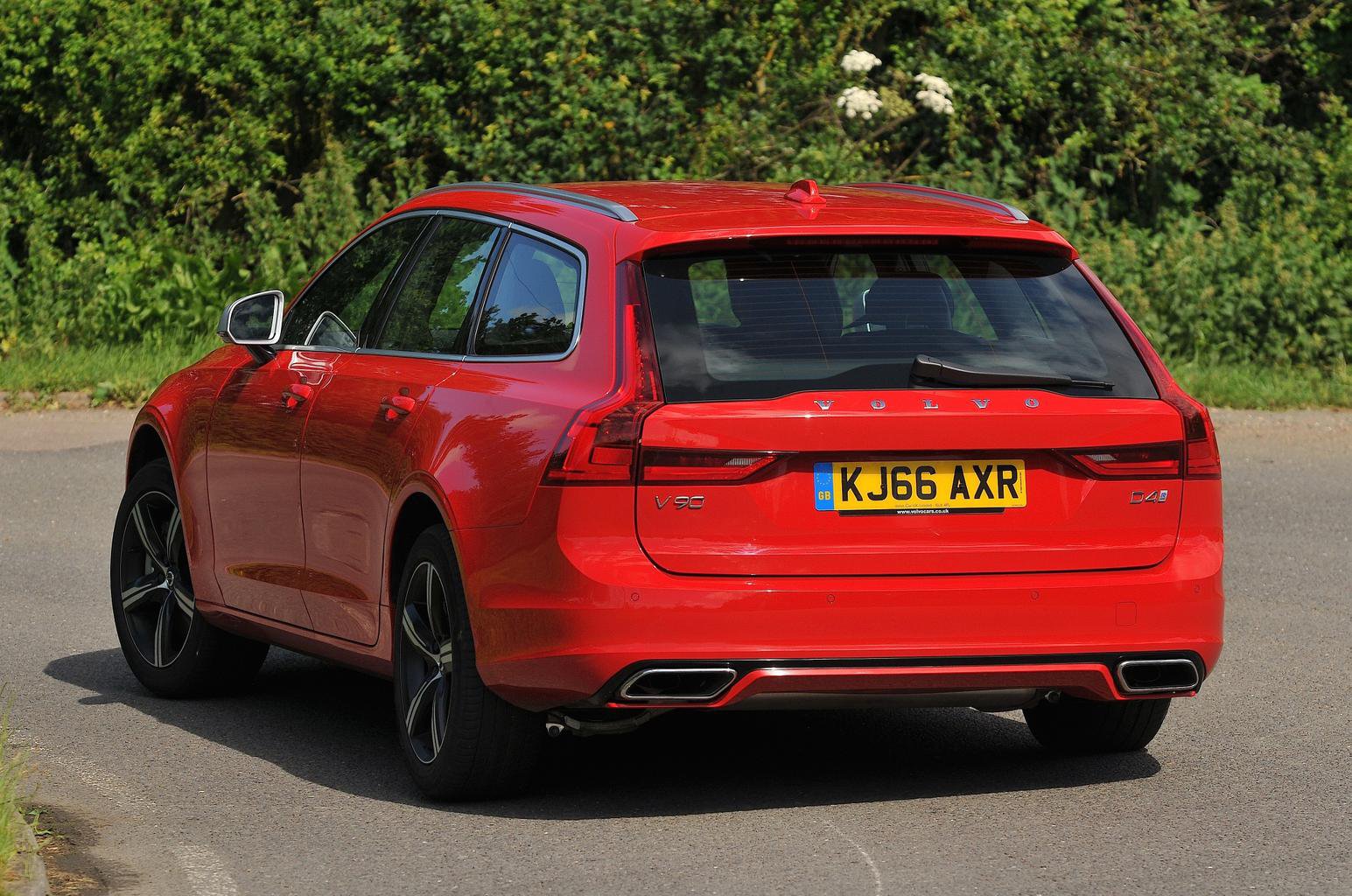 It’s unusual to see estates driven like the proverbial bat out of hell, and that’s just as well, because none of these cars can go like one. Brisk progress is what you get from their 2.0-litre diesel engines, with the E-Class nippiest whichever way you slice it – in a straight 0-62mph dash or kicking down on the move. But with the 5 Series only fractions behind, followed closely by the V90, the crux is that all three have the guts to easily haul a packed car or do battle in the fast lane.

Both the 5 Series and the V90 come with an eight-speed automatic gearbox, while the E-Class top trumps them with a nine-speed ’box. All three change smoothly and generally find the right gear for the circumstance, although the 5 Series’ is the most intelligent and the V90’s can be a little hesitant when pulling away.

Having that extra gear means that the E-Class’s engine spins the slowest at 70mph, although you can barely hear a peep from any of the engines at a steady cruise. The 5 Series is distinctly the quietest car overall, mind; its engine remains muted even when thrashed, while neither wind nor road noise is bothersome at speed. The E-Class makes the most road noise and its engine is the grumbliest under acceleration. Meanwhile, the V90’s engine is the most clattery at idle, plus the door mirrors whip up the most wind noise. 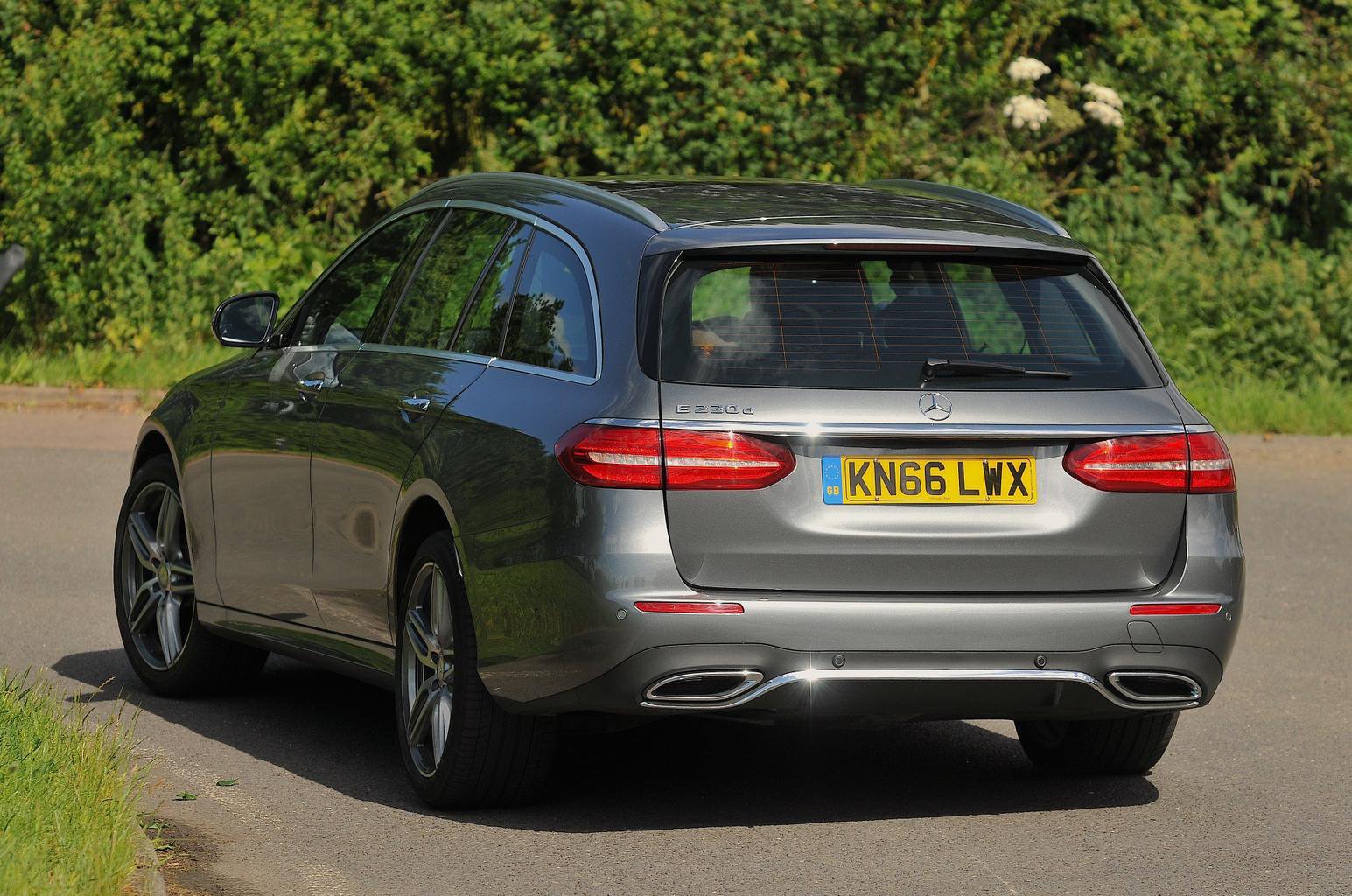 The air of calmness the 5 Series exudes also extends to its ride – if you add the (£895) optional adaptive dampers and set them to Comfort mode. Do so and the 5 Series sails over pimpled roads and soothes you across speed bumps in a wholly sublime fashion. A deep, jagged-edged pothole taken at speed is the only thing that will ruffle your feathers, but still less than it would in either rival.

Like the 5 Series, the E-Class’s ride is significantly improved by adding the adaptive all-round air suspension (£1495). Yet, as tested here on standard front steel springs and rear air suspension, it shakes and shimmies in a manner that’s mildly grating, although it never becomes genuinely uncomfortable.

It’s a similar story with the V90. From previous experience, we know that it, too, doesn’t ride perfectly on its standard passive springs and dampers. But our car came fi tted with optional all-round adaptive dampers and rear air springs (£1500), giving a suppleness on motorways that’s almost a match for the 5 Series. The V90 is the most controlled over dips and crests, too – an advantage that benefi ts its handling at the same time. 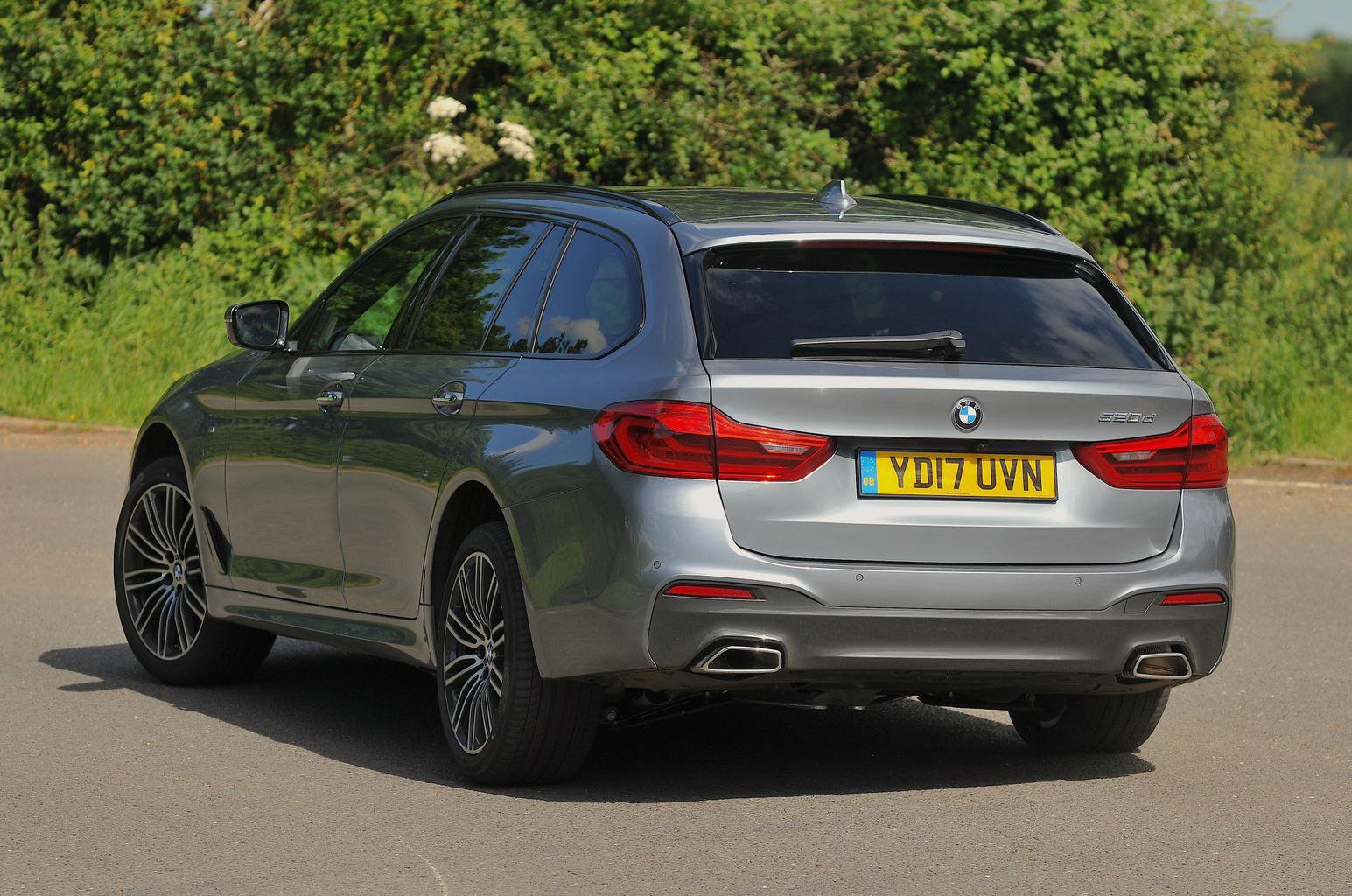 The V90 leans the least in corners, changes direction with the greatest alacrity and has the most grip. Its fi rm brake pedal is the most reassuring as well, although the steering is mildly disappointing: it doesn’t weight up consistently enough, nor feed back what the front tyres are up to well enough.

The E-Class steers more sweetly than the V90 and grips almost as keenly, but it sways about more in tight corners and takes longer to recompose itself. To a degree, this is something the 5 Series is also guilty of, making both German cars less planted at the rear than the Swede. It’s also fair to say that this Touring isn’t quite as pin-sharp to drive as the 5 Series saloon, with the least front-end grip and steering that’s slightly vague off-centre. It’s the most easily affected by crosswinds on the motorway, too.