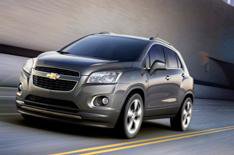 The new Chevrolet Trax SUV has been unveiled ahead of an on-sale date in spring 2013.

The Chevrolet Trax is a compact SUV that's closely related to the Vauxhall Mokka, which was unveiled at the 2012 Geneva motor show, and is due on sale in November 2012. Like the Mokka, the Trax be a rival for cars such as the Nissan Juke and Yeti.

Despite the similarities under the skin, the Trax has a different look to the Mokka, with chunkier styling that incorporates bulging wheelarches. A single image has been released so far.

The Trax is based on the same chassis as the Chevrolet Aveo, and while no details have been revealed, we'd expect it will be around 4.28 metres long the same length as the Mokka.

Like the Mokka, the Trax is expected to be available with front- or four-wheel drive. Engines are likely to be shared, too, so we'd expect a 1.4-litre turbo petrol and 1.7 diesel will be available.