More for you |
DVLA warns of 20% increase in car scamsWhat Car?'s top 10 used electric cars (and the one to avoid)10 most unreliable SUVsWhat Car?'s best cars for less than £250 per monthGuaranteed discounts on our 2020 Award winners - save up to £19,366
Home
News
New Ferrari revealed
news 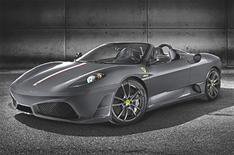 Take a first look at the Ferrari Scuderia Spider 16M, a roadster version of the 430 Scuderia.

The car has been built to celebrate Ferrari's 16th Formula One constructors' crown, which it won this year with drivers Felipe Massa and Kimi Raikkonen. The company says it is quicker around its Fiorano test circuit than any other open-topped Ferrari road car.