Which pocket rocket’s got the right stuff? Join us on the launch pad as we fire up the new Hyundai i20 N and its Fiesta ST rival...

Our favourite value hot hatch is a hoot to drive, thanks to its pokey 197bhp engine and agile handling

Hyundai didn't really do ‘fast’ and ‘exciting’ until a few years ago. And that was just fine, because the world needed practical, well-equipped and dependable cars. It still does, for the record.

But not everyone wants ‘sensible’. Hyundai decided there was room for a little hedonism in its range and, in 2016, created Hyundai N, a subdivision tasked with adding motorsport-style zing to some of its models. First was the acclaimed Hyundai i30 N hot hatch that took on potent, family-sized rivals, such as the Ford Focus ST and Honda Civic Type R. 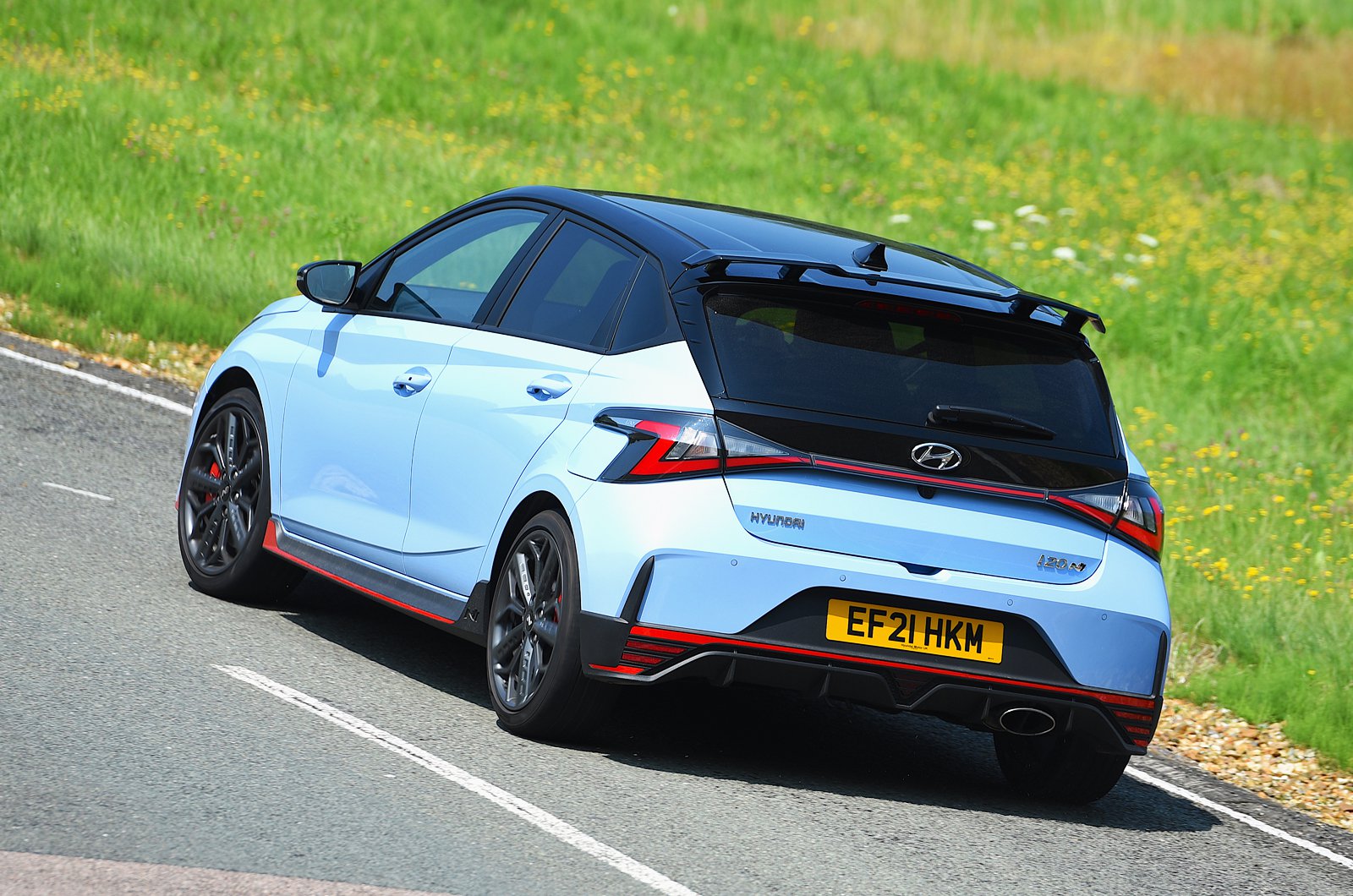 Now the i30 N has a smaller sibling, the Ford Fiesta ST-rivalling Hyundai i20 N, which slips into the cheaper end of the hot hatch market. So, what better car to test it against than the ST itself? After all, earlier this year we named it our best hot hatch for value.

Over and above the regular Fiesta and i20, these two add sports-tuned suspension, beefed-up brakes, a limited-slip differential, turbocharged power that peaks at around 200bhp, and racier styling inside and out. If you’re a fan of simplicity and purity, you’ll like that they both have old-school six-speed manual gearboxes too.

As ever with hot hatches, how fast they are and how well they scoot through corners is important, but it’s the joy of driving we really need to divine. And the only way to measure that is by the size of the smile you get when sitting behind the wheel. 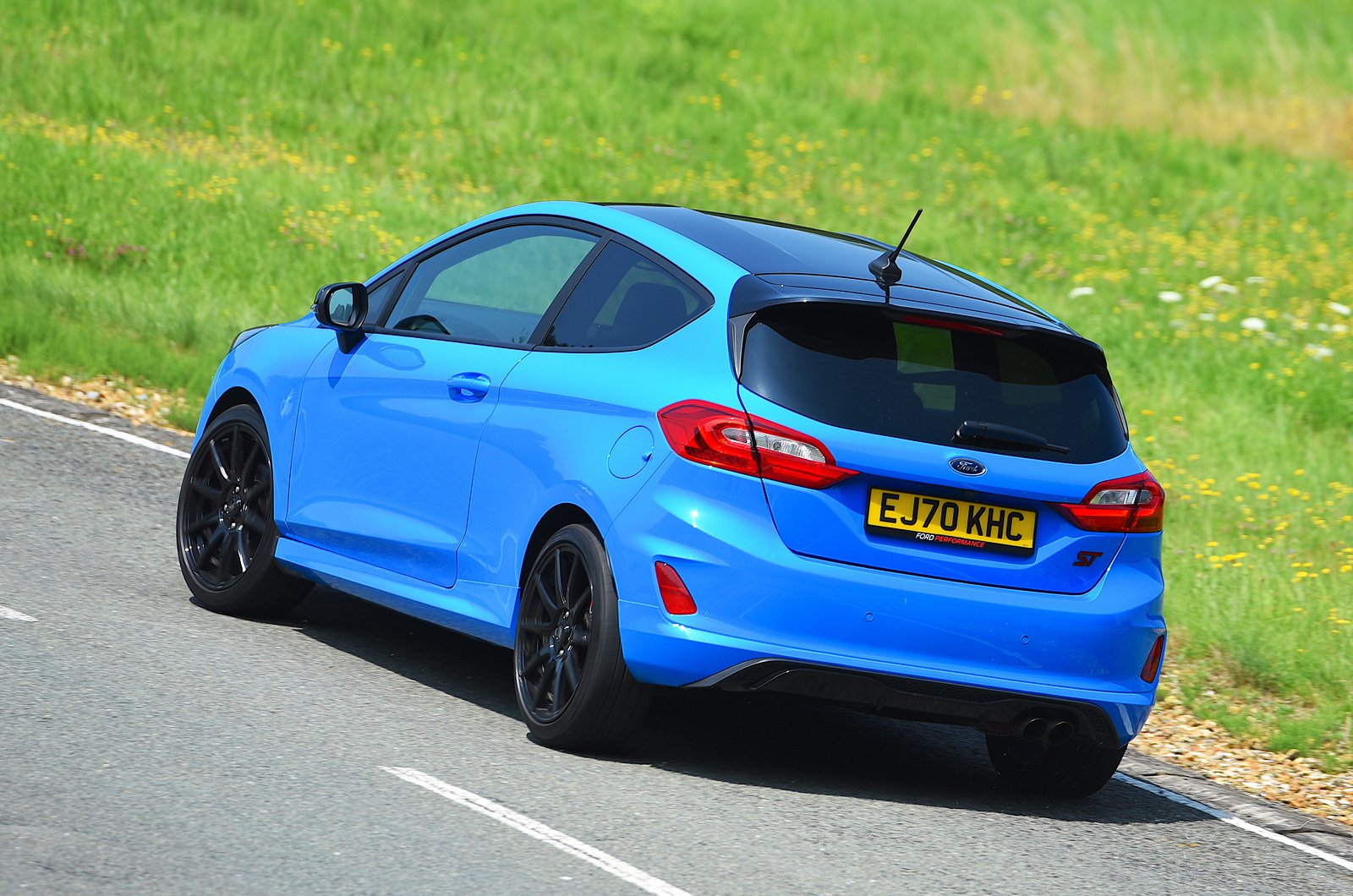 While these two cars are broadly on a par for power, their engines are quite different. The ST’s 1.5-litre motor has three cylinders and much more shove low down in its rev range, so it responds more keenly when you put your foot down. The i20 N’s engine has an extra cylinder and, in some ways, a more traditional power delivery.

It’s not as gutsy at around 1500rpm, instead building to a crescendo as you head towards the limiter. It requires you to drop a gear to bring the revs to the boil more often than you might in the ST. That’s fine, though; it’s part of the fun of driving a small hot hatch. It does mean the i20 N loses out to the punchier ST for in-gear zip, but both accelerated from 0-60mph in a swift 6.5sec. 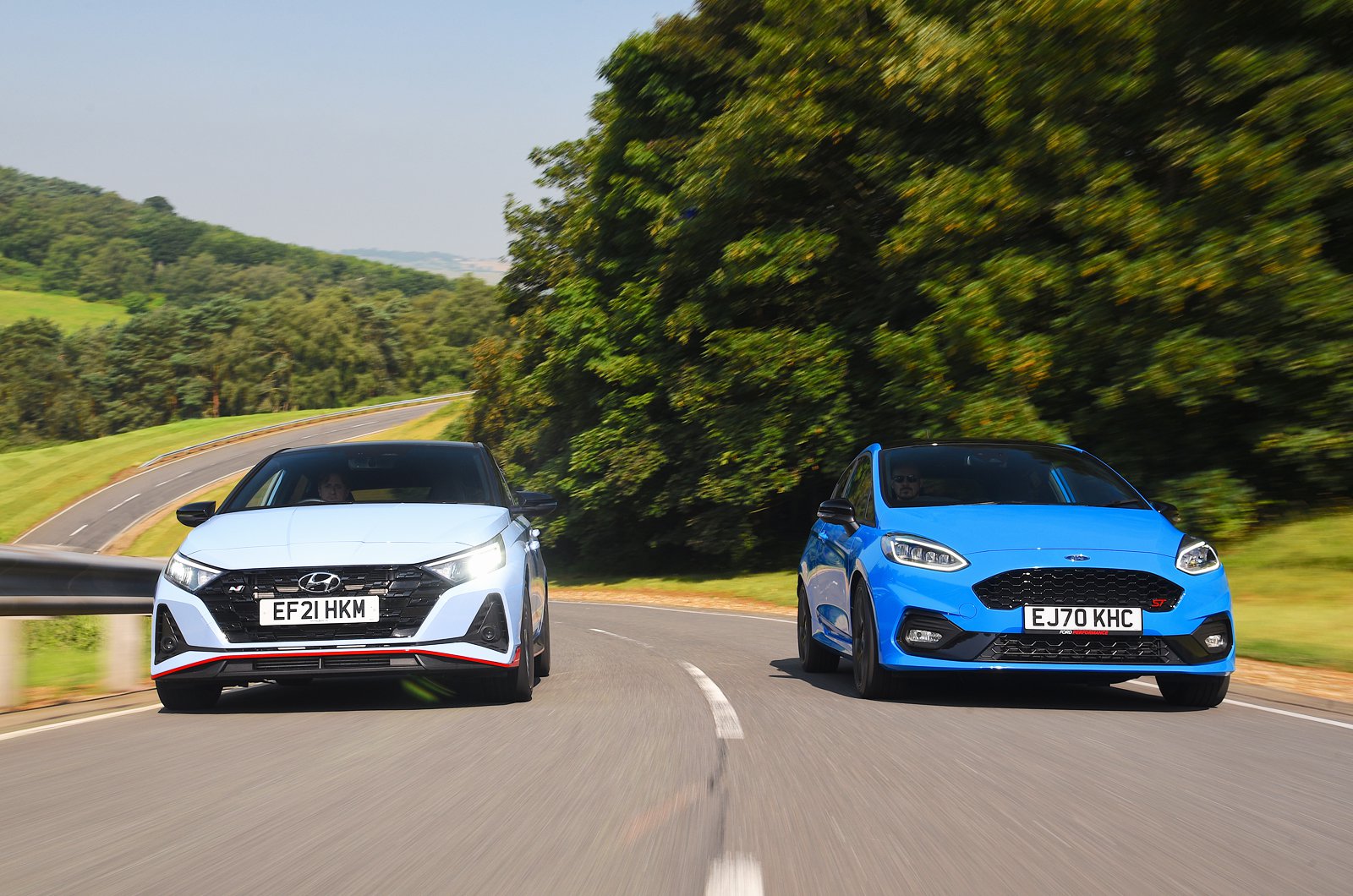 What’s less appealing is the i20 N’s turbo lag (the second or so delay between flooring the accelerator and the delivery of oomph) and the way the engine continues to surge for a moment when you take your foot off the accelerator. Those lazy responses aren’t ideal in a quick car, where fractional control is key.

Do they sound like a couple of road racers? Well, neither sounds particularly authentic, with digital enhancement that gets more acute as you switch their driving modes from softer to the more aggressive settings. Beneath all that, there’s a traditional hot hatch bark from the i20 N’s engine, while the ST’s is underpinned aurally by a swashbuckling thrum. Which one is better? The truth is, both fit the bill.

Manual gearboxes are a dying art form these days, as more and more performance cars go for paddle-shift automatic ’boxes, so it’s great to have two analogue cars that let you swap cogs yourself and give you the tools to do it well. The ST’s ’box is slightly notchier, but its stubby lever is still a joy to flick every which way in search of gears. The i20 N’s shifter is longer but more precise and meshes the gears more cleanly. 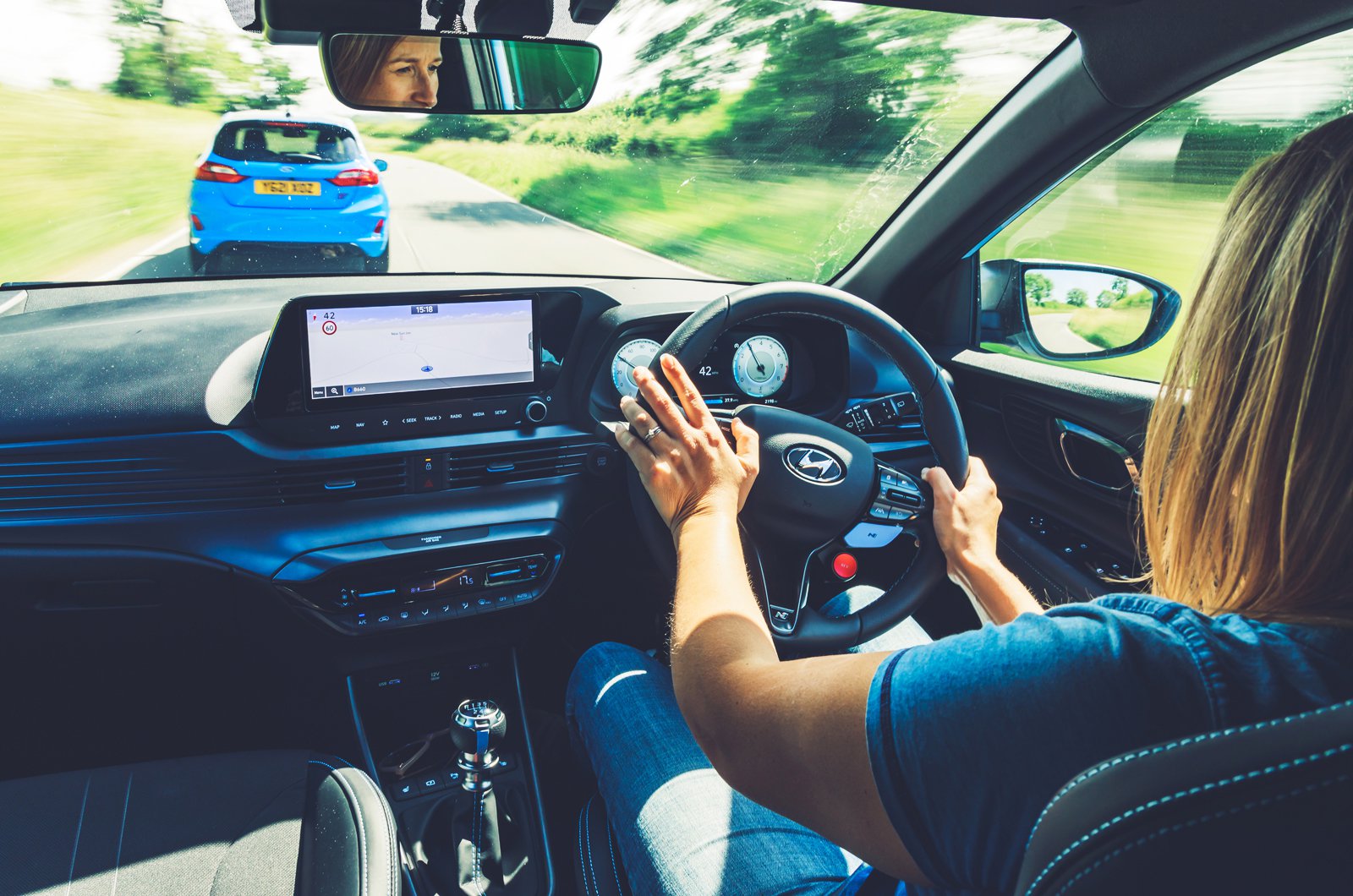 Their clutch bite points are finite enough to feed the drive in smoothly, although the ST’s point of engagement is much closer to the floor. That takes a bit of getting used to. Both cars’ brake pedals feel reassuringly firm, but the i20 N’s has more of an effect, shaving four metres off the ST’s stopping distance from 70mph. It’s not all good news, because the i20 N’s nose dives more acutely when you stamp on the brakes, causing the back end to go light and weave a little. Let’s just say that’s not exactly confidence boosting.

So, the ST has better braking stability, and to go with it there’s less lean in bends, slightly better body control over undulations and a more playful balance between its front and rear wheels. That’s all about the spread of grip and, at its limits, the little movements that make the car feel agile and alive. For example, you can provoke the rear wheels into a little slide on the way into a bend. But why would you? Because it helps the car turn and find the apex, that’s why. Oh, and it’s fun to do.

The problem is the steering. Like a disobedient child that won’t sit still, the ST follows furrows in the road rather than your exact line, and jinks this way and that as the front wheels are corrupted by the shove from the engine. You find yourself holding the steering wheel tightly with a sense of trepidation, trying not to make any overcorrections, because the steering is fast and you can easily overdo it. Because of that, the ST isn’t a car that flows easily down a narrow country lane that requires absolute accuracy. 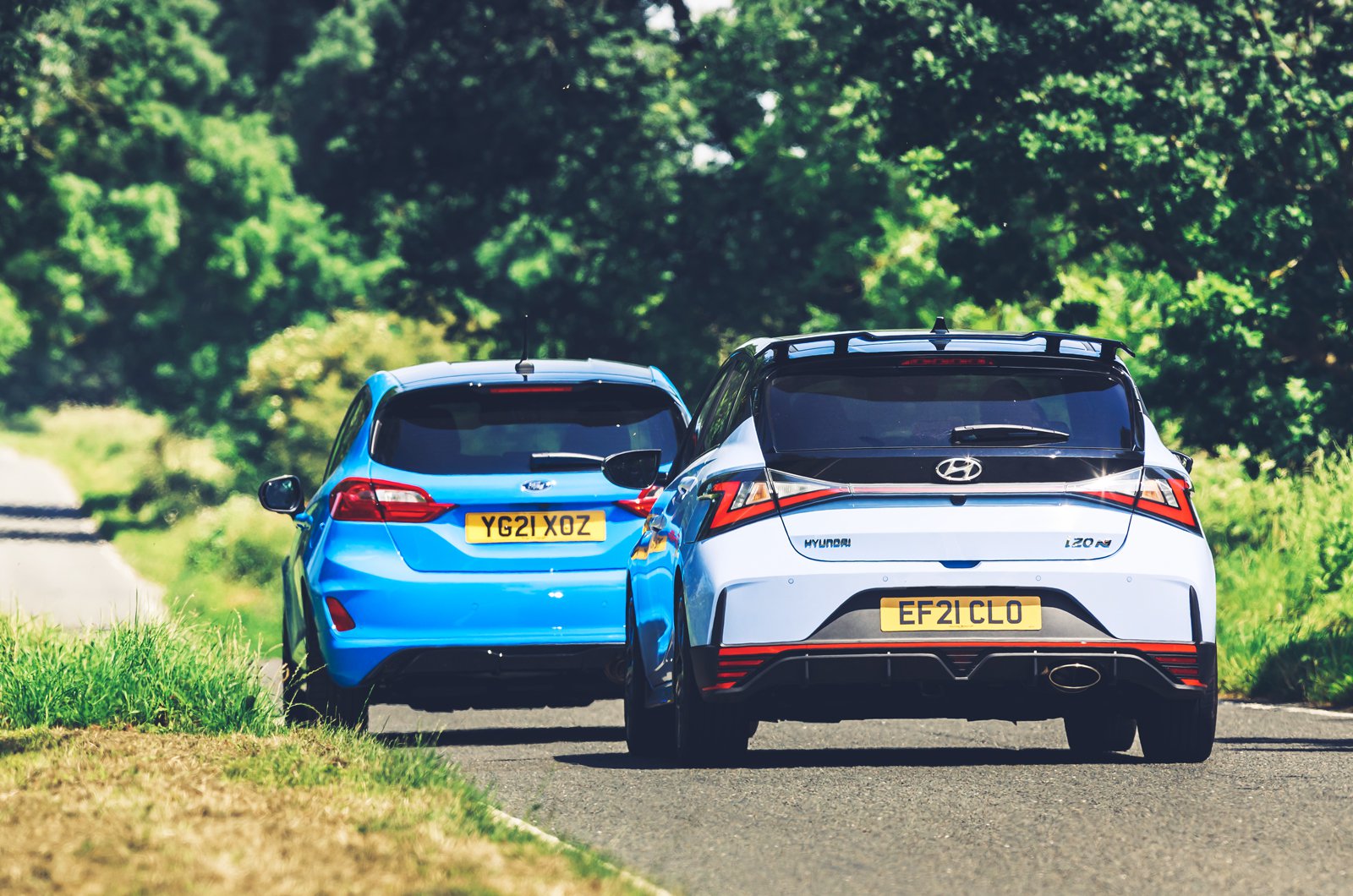 The i20 N is calmer. Yes, the steering still twitches, and for all the reasons the ST’s does, but far less aggressively. The steering isn’t as hyper-quick, so you find yourself guiding the car with your fingertips rather than clenched fists. It has mighty front end grip, too, so you can carry at least as much speed through turns as in the ST, even though there’s a bit more body lean and a less playful handling balance. That’s not necessarily a bad thing; you might prefer the i20 N’s more neutral nature. For us, though, the ST ekes out the slightly wider grin.

Hot hatches generally have firm rides, but these two bring that characteristic into vivid focus. Overall, the i20 N is easier to live with, because it’s better at dealing with smaller bumps and feels more settled on a typical motorway. Just avoid potholes and, more so, sharp ridges, because boy do you get a pounding over those. The ST is easier-going over the nastier notches, but it fidgets more the rest of the time, and in many ways that’s even more irritating.