The Ioniq is billed as offering cheap running costs and sportier handling than other hybrids.

Roomy and cheap to run, the Prius has become the default hybrid choice. Is it the best?

“Diesels are great for economy, but not great for the environment. I do lots of miles, so won’t a petrol end up costing a fortune in fuel?” If these are choices you’re pondering, you may have considered a hybrid.

“What is a hybrid?” you might also ask. Well, usually it will have a small petrol engine, plus an electric motor to boost power and fuel economy, and to cut CO2 emissions. A small battery, recharged for free by storing energy as you slow down, powers the electric motor.

Hyundai's Ioniq is the latest hybrid to go on sale. It’s a little larger than a Volkswagen Golf, and pumps out as little as 79g/km of CO2. As any company car driver knows, that means cheap benefit-in-kind (BIK) tax.

Toyota’s been producing its ubiquitous Prius hybrid for years. The latest model emits even less CO2 than its predecessor (from 70g/km), making it the car to beat. 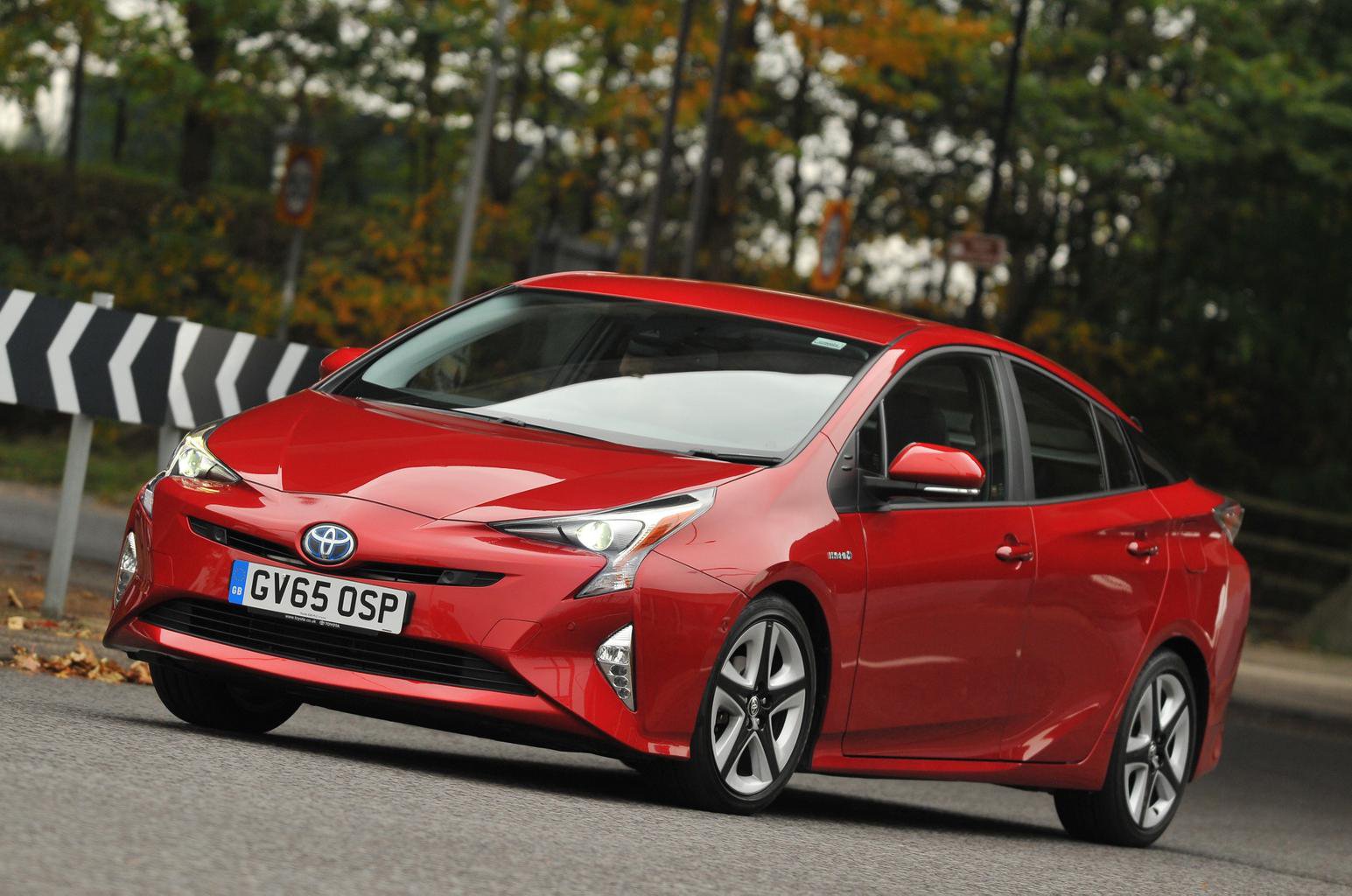 Do these hybrids match a regular Golf diesel for pace? Broadly, yes; both have relatively sprightly performance. The Ioniq can be momentarily hesitant when you step on the accelerator pedal to pull away, but once it’s on the move it picks up pace smartly and gets to motorway speeds with ease. The Prius isn’t quite as nippy from a standstill or when building speed for an overtake.

Tickle the accelerator of either car, and as long as there’s charge in the battery, the car will pull off and keep up with city traffic on eerily silent, pure electric power. However, push the accelerator farther and the petrol engine kicks in; you can’t feel this, but you can hear it. It creates a background hum at a cruise, but this rises to a monotone drone during acceleration.

This noise is more prevalent in the Prius due to its CVT automatic gearbox. As you accelerate, it suddenly sends the engine revs soaring and they stay high until you lift off the accelerator, which is a bit irksome. The Ioniq’s six-speed automatic ’box slips through its gears as smoothly, but offers the option to shift gears manually – something you can’t do in the Prius. 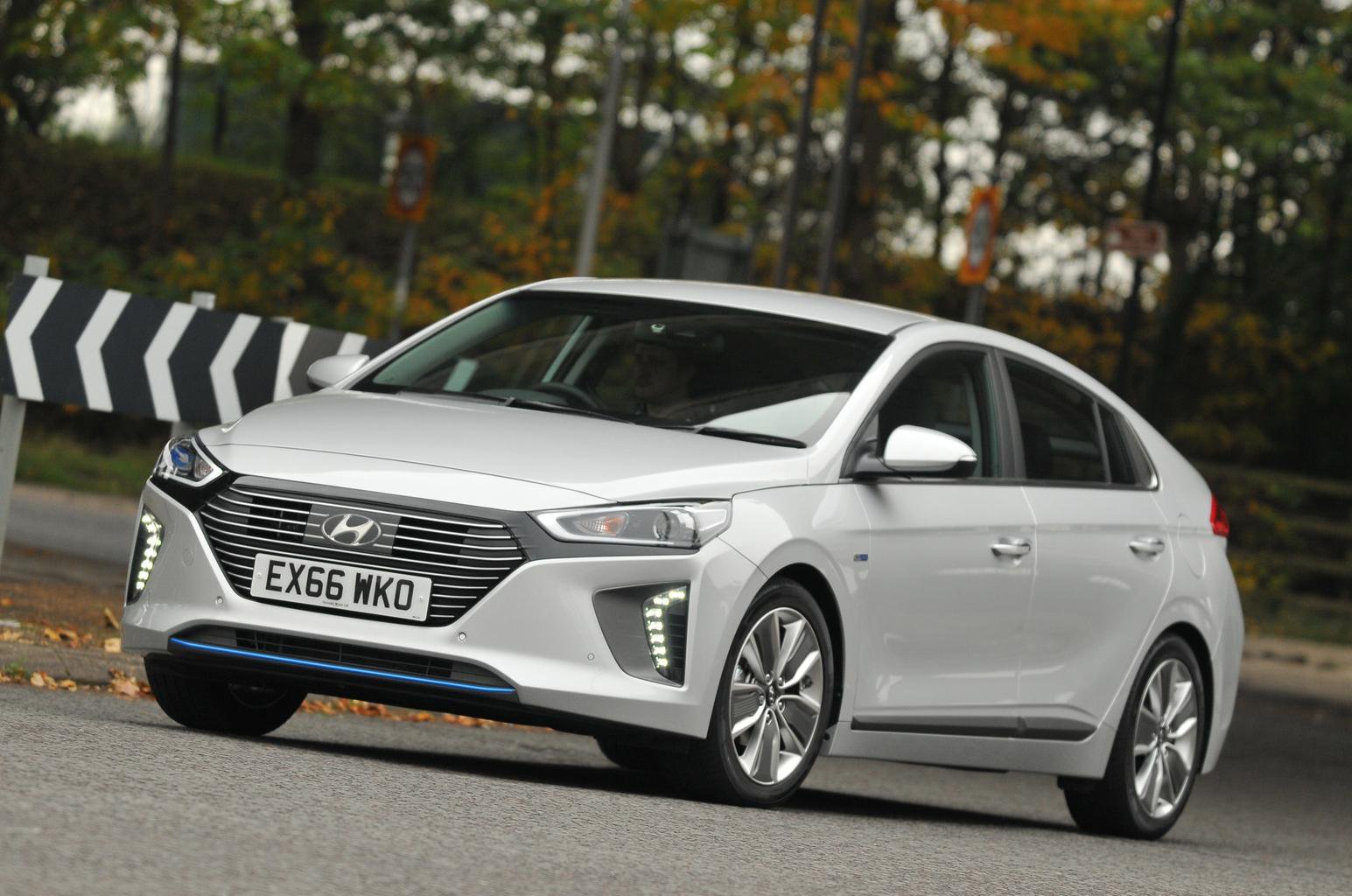 The Prius’s brakes are grabbier, too, making it harder to drive smoothly in stop-start traffic, and there’s more road noise. At motorway speeds, however, wind noise in the Prius is as well contained as it is in the Ioniq.

You won’t have your fillings rattled out in either car. The Ioniq is a touch firmer, handing the softer Prius the laurels for smoothing out scruffy road surfaces and speed humps. The Ioniq feels better tied down, though; it bounces around less over dips and crests.

The Ioniq is much more agile, too. Its stiffer suspension helps it stay flatter through corners, and its steering delivers more feedback, building a good amount of weight so you can measure your steering inputs with greater accuracy. Thatsaid, by class standards, the Prius is still a tidy handler, and its slightly lighter steering makes it a little easier to park.