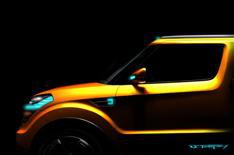 Here is the first official picture of a new Kia that will be unveiled at the Detroit motor show in January.

Kia has confirmed only that the car is based on the Soul supermini, but insists that it is 'more than just a re-packaging treatment'.

There is speculation that it will be a five-seat MPV that will arrive in the UK late next year. The Citroen C3 Picasso/Vauxhall Meriva rival will be a standalone model and will not carry the Soul name.

A three-door hatchback variant of the Soul, or a pick-up truck version for the American market, have also been suggested as cars that the concept could be hinting at.

The standard Soul will go on sale in the UK in March.