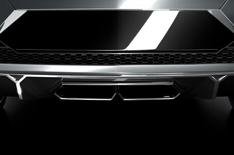 This is the carbonfibre rear diffuser, twin rear exhaust pipes, rear tyres, grille and rear bumper of a new Lamborghini that will be launched at the Paris motor show.

That's as much as we can tell you about it at the moment, as Lamborghini has released no other details beyond saying: 'It's not just a new Lamborghini. It's a new world.'

Speculation about what the car could be includes:

• a sub-Gallardo sports car to rival the Porsche 911

• a 4x4, which has often been rumoured but doesn't fit the brand image

• a new four-door saloon, although this could harm stablemate Audi's sales

Full details will be released at the Paris motor show on October 2.