* New 3.0-litre diesel leaves our car out of date * Technology keeps on moving ahead * Love affair continues, though... 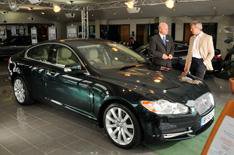 I recently spent a day at Jaguar's engineering and design centre in Coventry, where our Jaguar XF was created, and the news I was given while there was anything but encouraging.

The XF is about to get two new 3.0-litre diesel engines to replace the 2.7-litre V6 that's in our car and which has been on sale for under a year. In short, the model we are running is about to become - in Monty Python-ese terms - an ex-car.

To buy or not to buy?
My first reaction was to wish that I'd waited a little longer to get an XF. Not only do the new engines deliver more power with improved fuel economy, they are also four bands lower for company car tax. They are no more expensive, either.

On the way back home, however, I decided I'd made the right move to get the XF when I did. Cars are a bit like cameras and computers: they're always evolving, and if you wait for the perfect moment to buy, you'll never actually do the deed.

By getting the car in October, I had it in time for two memorable trips to Europe towards the end of last year, and now that the engine's got 6000 miles under its belts it's loosened up beautifully. Performance has improved noticeably and on long runs it is regularly delivering 35mpg.

The love affair continues...
To tell the truth, I absolutely love the car. From my apartment in west London I get an elevated rear-three-quarter view of it, and I still think it has the nicest back end since Kylie donned 'those' gold hot-pants.

It even looks good when it's dirty - try keeping a dark green car clean in this weather - and as my colleagues would gladly tell you, I am not someone who suffers filthy cars with good grace.

Just one fault to report so far: a bit of rubber trim at the base of the offside rear door has worked loose and doesn't seem to want to be put back in place. I'll have a more thorough attempt when the weather warms up a bit.