Home
Feature
Peugeot 205: best cars in the history of What Car?
feature

Reviews editor Will Nightingale reckons the achingly pretty Peugeot 205 is the greatest car we've tested in our 47-year history – but do you agree?...

The current regime at Peugeot must be sick to death of talk of the 205. Every car the French brand has launched since – good, bad or mad – has immediately been compared to this achingly pretty 80s classic. And I’m as guilty as anyone.

But anyone fed up with continual comparisons to the 205 would do well to remember that Peugeot’s very existence today owes no small debt to this fabulous little hatchback. And if that isn’t a good enough reason to vote it the greatest car of the past half a century, I’m not sure what is. 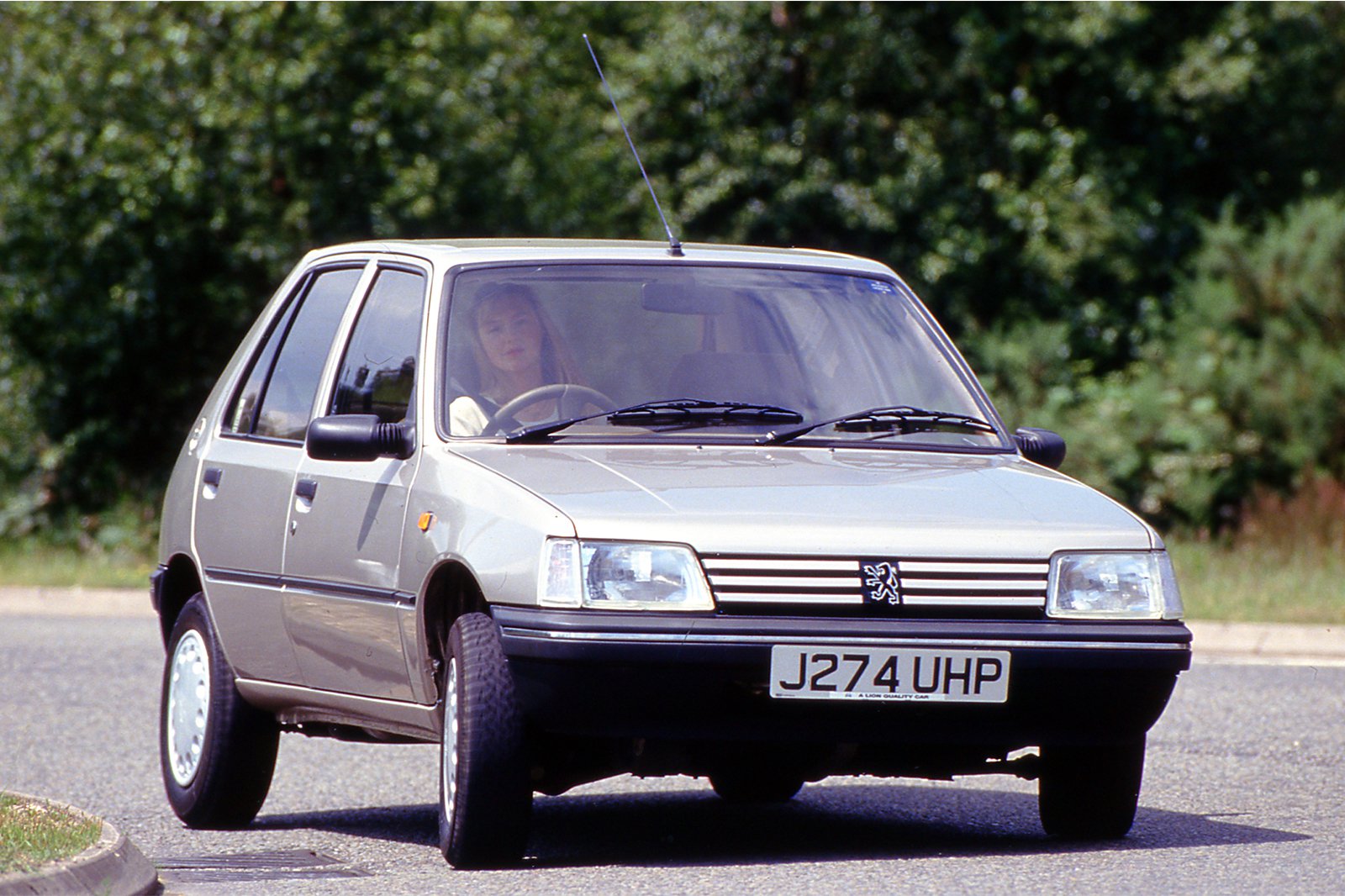 When the 205 first arrived in Britain in late 1983 – at a time when Peugeot had major financial worries – it made other small hatches of the time seem positively antiquated. And we’re talking about the modest ‘everyday’ versions of the 205 at this stage, like the 1.4 GR that picked up our overall Car of the Year award in 1984.

When we handed out the award we said:

‘The qualities that earn the Peugeot 205 our Car of the Year title are the traditional Peugeot values of comfort, civilisation and refinement. But the 205 itself is far from traditional, for by bringing much of the sophistication, smoothness and elegance of a bigger car into the competitive supermini class, Peugeot has helped the small car come of age and [has] thus pioneered a whole new generation of ‘big’ small cars.’’

The rival Fiat Uno, launched around the same time and another jolly fine car in its day, ran the 205 closest, ending up a respectable three points adrift in our scoring tables. But after that, the next best-in-class was the Polo and that was more than 40 points off the pace. That gives you some idea of just how far the 205 moved the small car class on. 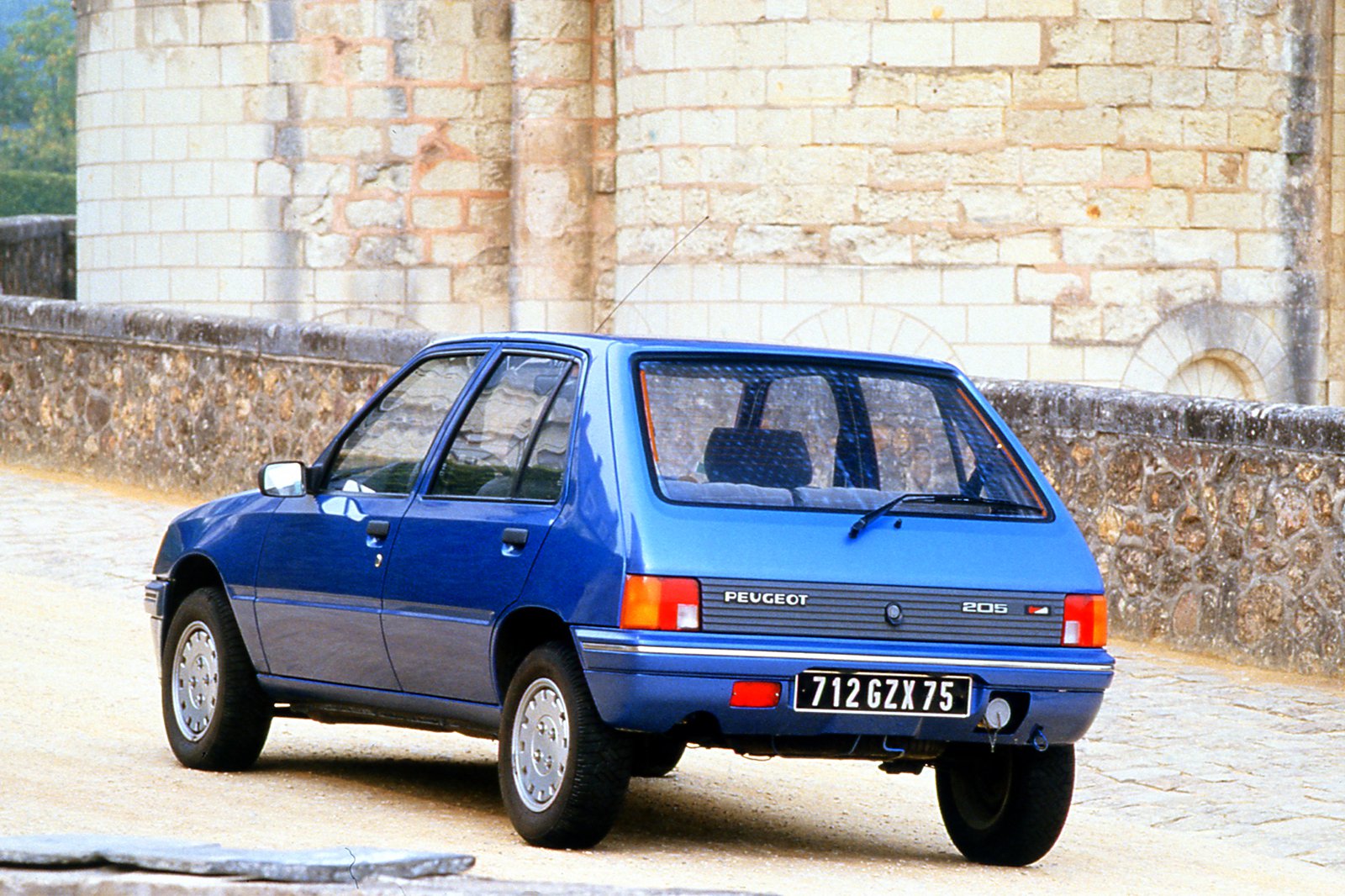 But it’s all very well shining brightly for a short period back in the 1980s. Frankie Goes to Hollywood did that and I wouldn’t be arguing they're the greatest band of the past 50 years. Nope, it’s also the 205’s longevity that makes it such a strong contender, something helped enormously by the GTi hot hatch that arrived in 1984.

First came the 1.6 GTi, which won our Sporting Car of the Year award in 1985 and 1986 and beat rivals like the Fiat Uno Turbo, Golf GTI and Renault 5 GT Turbo along the way. Then in 1987 a new and more powerful 1.9 GTi snapped up the award and ultimately became the poster child for the 205 range to this very day. In fact, even when the GTi lost its Sporting Car crown in 1988 it was to something entirely different and vastly more expensive: the Ford Sierra RS Cosworth. 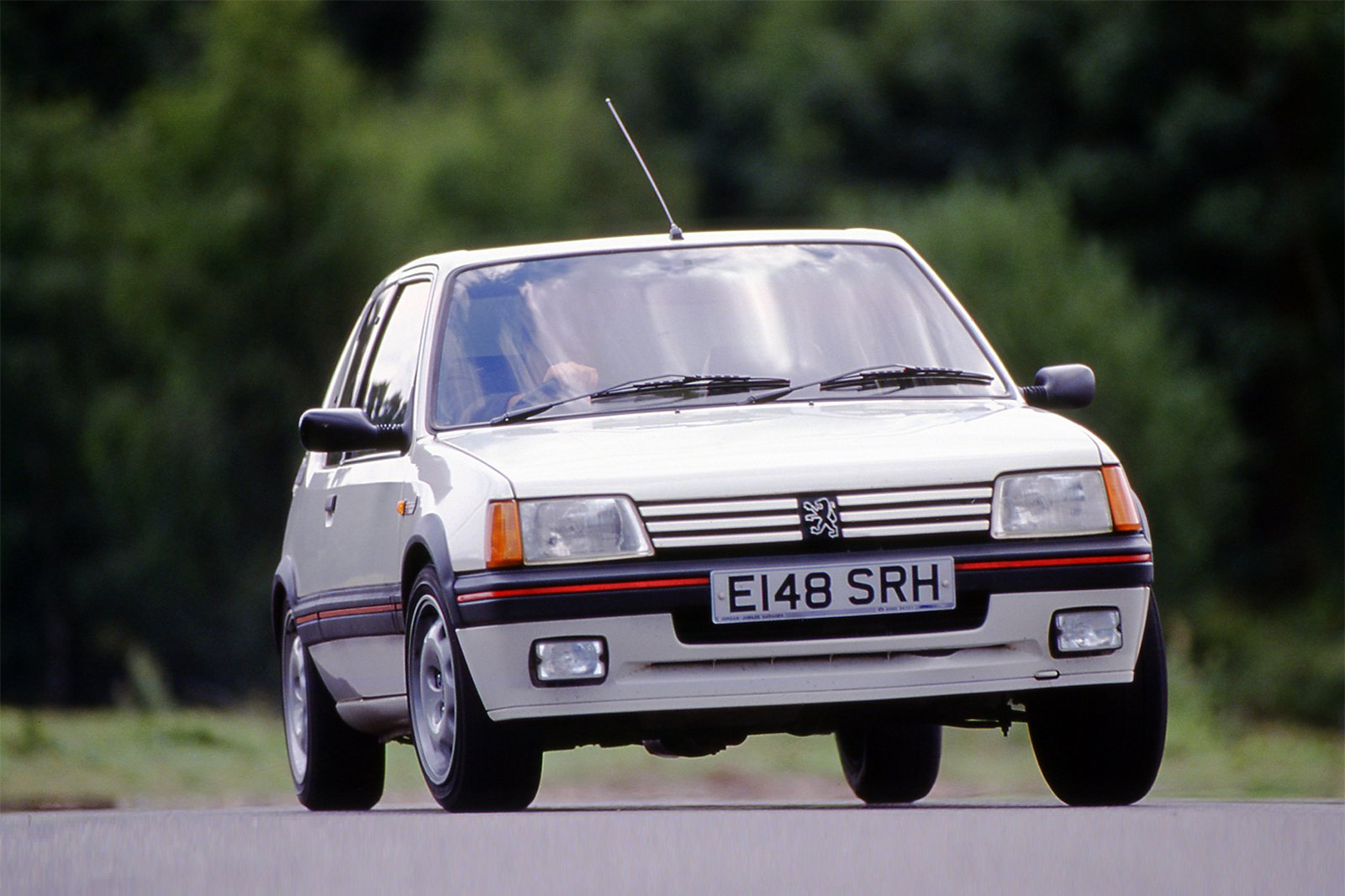 Had we had a designated Hot Hatch category back then, the 205 GTi’s reign would almost certainly have been longer. Heck, in one of our group tests in late 1992 shortly before its demise, it even beat its eventual replacement, the Peugeot 106 XSi.

Which was actually the better GTi with the benefit of 33 years of hindsight? Well, that’s still hotly debated, although my vote goes to the 1.9 GTi. Sure, it had longer gearing so didn’t feel quite as highly strung as its cheaper sibling, but an extra 15bhp (130bhp in total) gave it the firepower to crack 60mph from a standstill in 7.8sec and do 127mph. 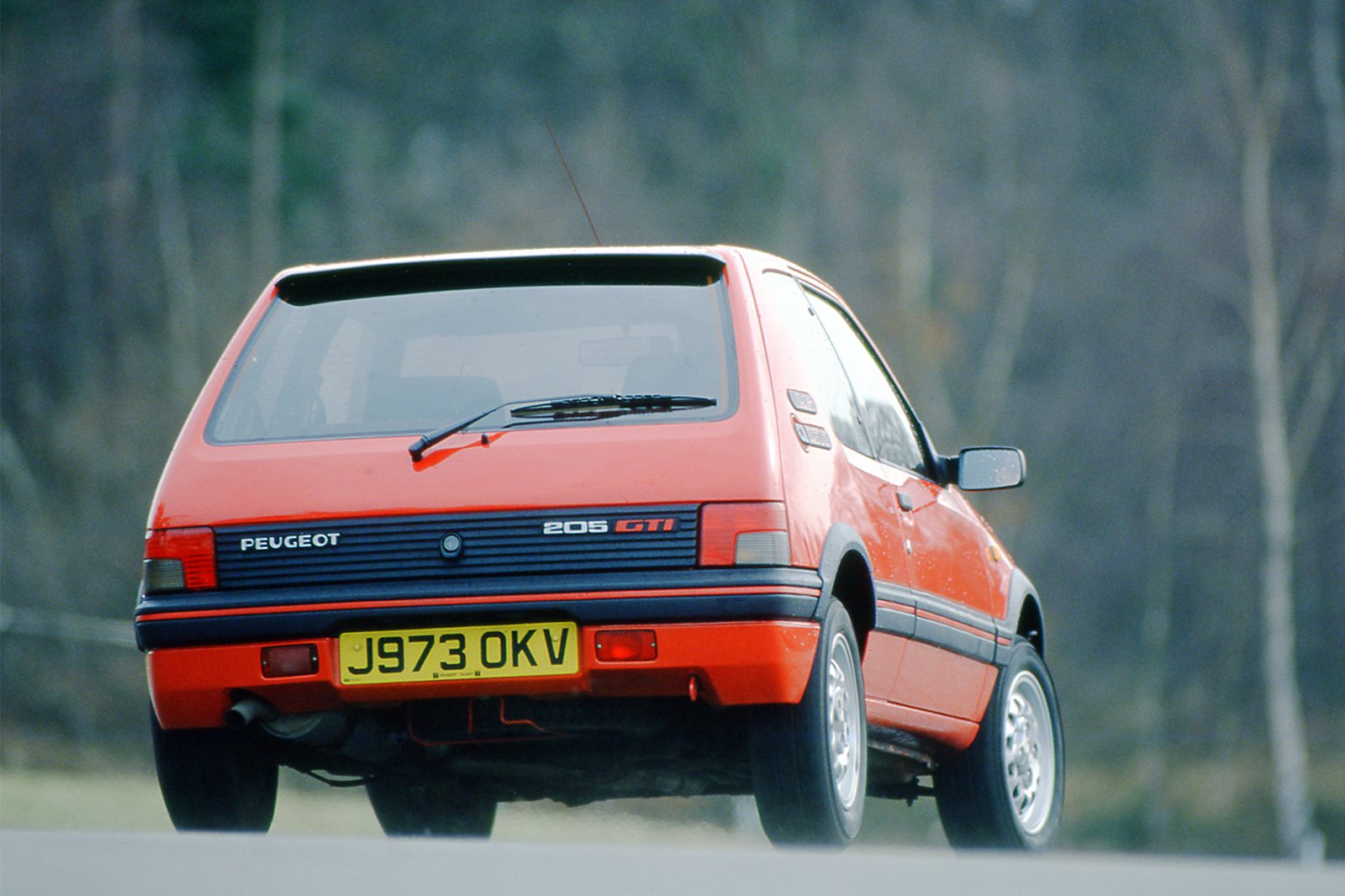 Amazingly, those figures are still respectable today. And while the 1.6 GTi’s 14in ‘pepperpot’ style alloys were certainly distinctive, the effortlessly cool 15in wheels fitted to the 1.9 were just about the best wheel design ever and a perfect shoe for the GTi's understated outfit.

Both GTi versions were utterly joyful to drive, with the sort of direct steering that channelled the surface of the road to your fingertips like no modern car could hope, perhaps with the exception of ‘toys’ like the Lotus Elise. Admittedly, with fairly fat tyres and no power steering, the payoff was a serious upper-body workout whenever you attempted to park your GTi but, hey, you'd pay good money for that down at your local gym these days. Even lesser versions of the 205, especially the mildly sporty XS and GT models, were great fun and all versions had a remarkably sophisticated ride by the standards of the day. 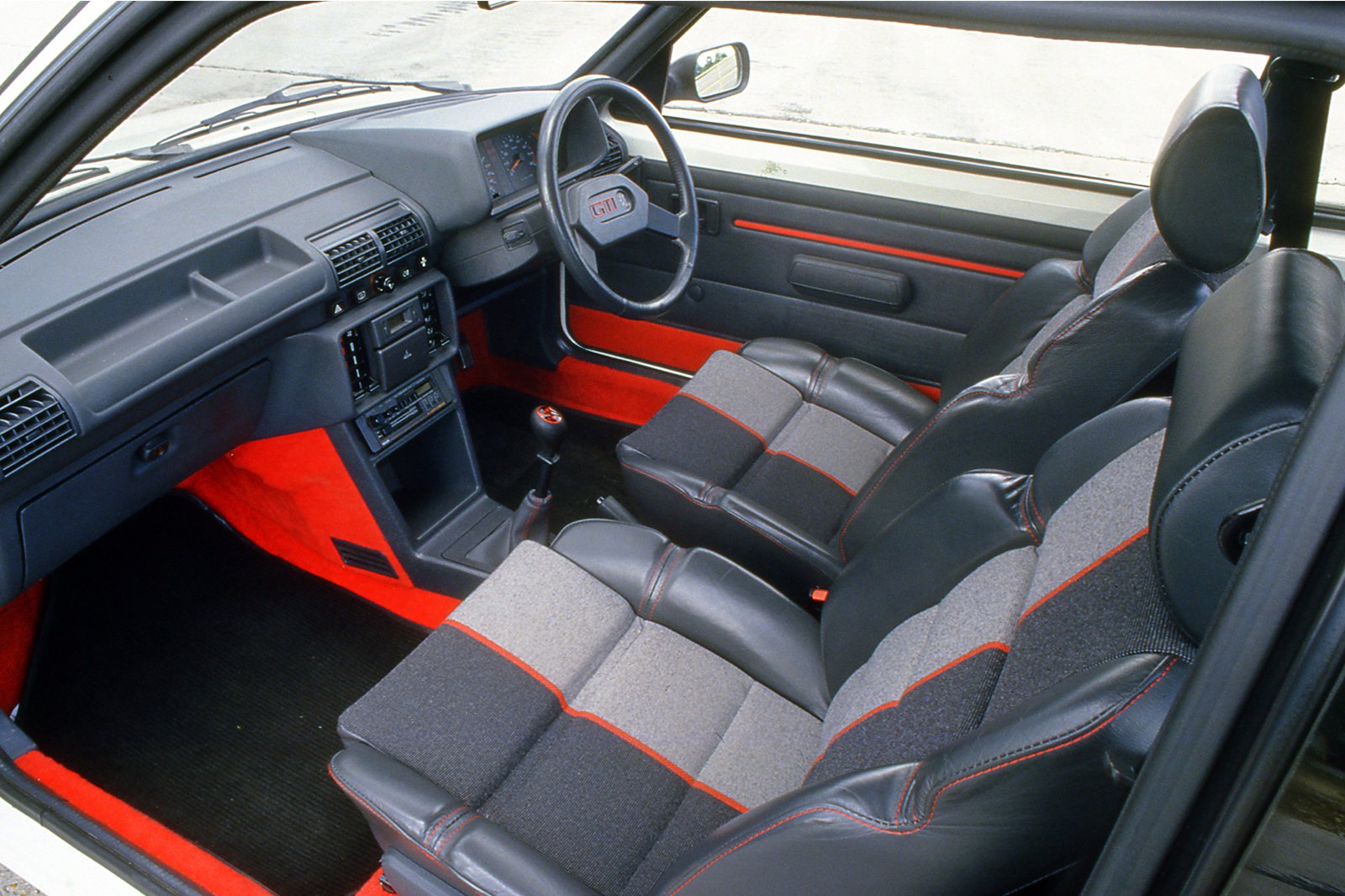 Since the final 205 rolled off the production line in 1998 (it was killed off in 1996 in the UK), Peugeot has certainly had its ups and downs. Standout models include the 405 and 306, with the biggest dip in form coming with the first-generation 208 and 2008 in the early 2010s. But while the company’s current line-up is unquestionably the best for decades, still nothing has quite hit the heady heights of the 205. It is, I reckon, the greatest car we’ve ever tested.

Come back tomorrow to read about our next contender for the title of best car in the history of What Car?: the Renault Espace

Next: Read our full review of the modern-day Peugeot 208 >> 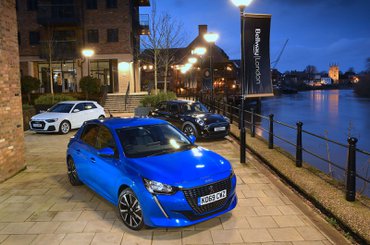 New Peugeot 208 vs Audi A1 vs Mini hatchback: verdict

New Peugeot 208 vs Audi A1 vs Mini hatchback: infotainment

New Peugeot 208 vs Audi A1 vs Mini hatchback: costs

New Peugeot 208 vs Audi A1 vs Mini hatchback: practicality