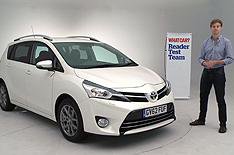 It's been three and a half years since the Toyota Verso had a makeover, and now the freshly revamped seven-seater is about to make its debut in UK showrooms.

The updated MPV has been given the same exterior styling tweaks as the Auris and Auris Touring Sports namely, a new grille and bumper, chrome detailing and a new, more aggressive-looking headlamp set-up.

Inside, Toyota promises more style and comfort, too. Soft-touch cabin materials, satin-finish trim and more chrome detailing have all been introduced, while leather seats and a panoramic roof are now available as options.

So, has Toyota managed to modernise the Verso, yet retain its no-nonsense practicality? We've already reviewed the new Toyota Verso, but what do readers think of the car? We invited What Car? readers along to an exclusive preview to find out what they thought. Take a look at the video below.