* Low entry price for electric car * Buyers will have to lease batteries * Goes on sale next year... 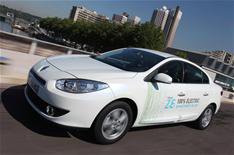 The Renault Fluence electric car will cost from 17,850 when it goes on sale next summer.

The price includes the maximum 5000 Government grant available for electric cars, although buyers will also have to pay 75 per month to lease batteries, based on 6000 miles per year over three years. Other leasing plans will be announced later.

Our current favourite electric car, the Nissan Leaf, costs from 25,990 (including the grant), but the batteries are included in the purchase price.

The Fluence ZE (zero emissions) is a five-seat, four-door saloon powered by a 70kW motor and has a range of 75 miles.

The Fluence also has charging sockets on both front wings.

Customers can place a 20 non-refundable deposit to reserve a Fluence at www.renault-ze.com.

Fluence Crash Tested Video
See the Fluence get put through Renault's testing programme in the video below.