* New store opened by former F1 champion * Shop located in London's West End * Sells everything from a cap to an engine... 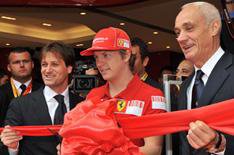 The 2007 champ cut the ribbon to open the new shop on Regent Street, in the heart of London's West End.

Rikknen was then treated to a specially arranged drive-by from some of the greatest Ferraris ever made. Legendary models taking part included a Daytona, F40, F50 and Enzo.

Stocking everything from Ferrari baseball caps and mountain bikes, through to carbon-fibre humidors, there's something for every car nut.

Racing fans won't be disappointed, either, as there's a selection of genuine Formula One car parts available, including pistons, steering wheels, and even an entire Ferrari engine.

The new store is the latest in a chain of Ferrari shops located in major cities across the globe, including San Francisco, Abu Dhabi and Rome.

Watch next week's What Car? video podcast and you'll be able to see the new Ferrari store for yourself.