The Skoda Octavia Estate has a five-star What Car? rating, but does the plug-in hybrid version continue to impress when you live with it every day?...

In theory, my Skoda Octavia iV Estate plug-in hybrid (PHEV) should show an electric range of up to 41 miles on its digital readout when fully charged. The reality is a little different. 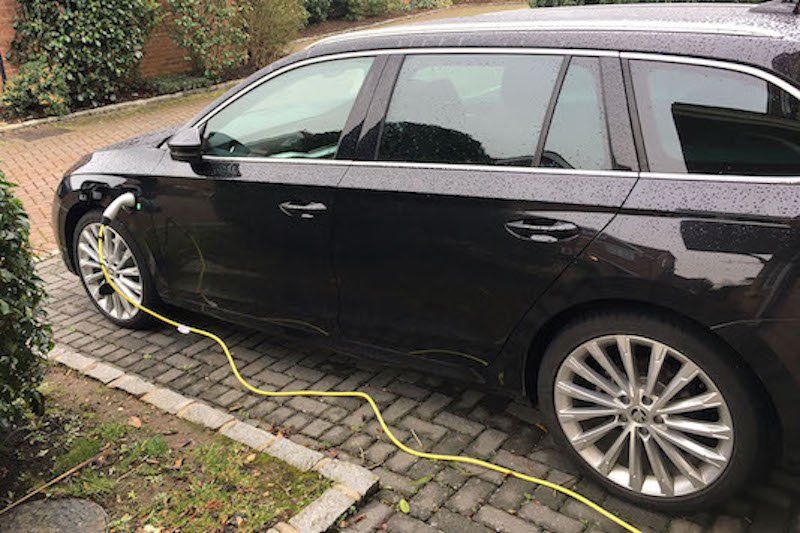 Now, I admit to not having a fancy charging box at my house, but a more humble three-pin plug socket in the garage. I plug the car in while it sits on my driveway because taking the trouble to keep a PHEV charged up rewards you with far better efficiency.

This humble plug socket arrangement shouldn’t make any difference to the amount of charge the car will accept, though, and the Octavia is often left charging for the five or six hours it says it needs to achieve a full charge.

So far, in temperatures ranging from zero to 18C, I haven’t seen the digital readout on my car’s dash show more than 32 miles. In fact, in cooler temperatures, it can show as little as 25 miles. I have to say that differences in the figures of that order haven't been unusual in my experience of plug-in hybrid and fully electric cars. Indeed, a predicted electric-only range of 32 miles where 41 has been quoted isn’t actually a bad pay-off. 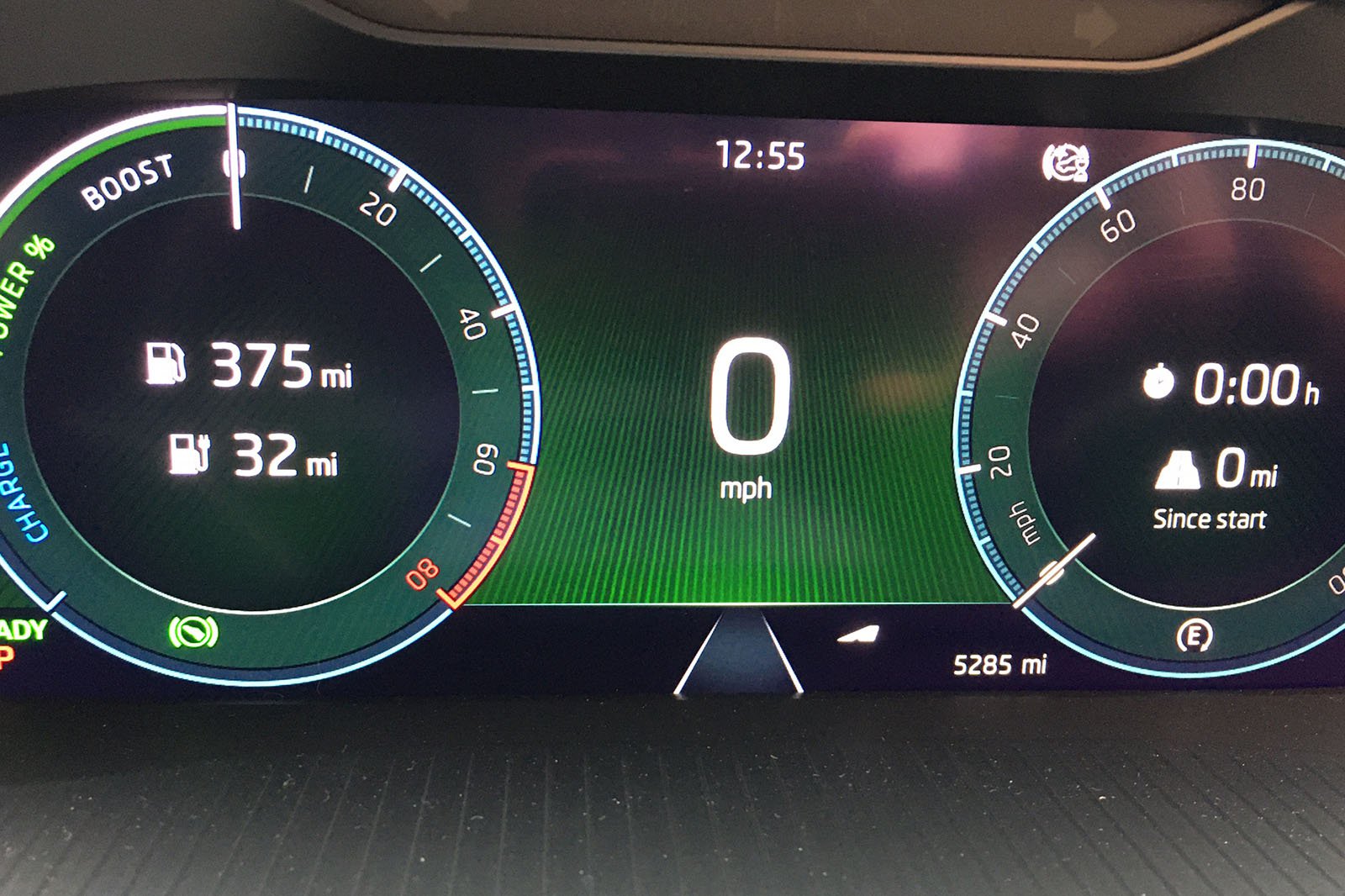 What's more important is how far the car will actually go in such situations, and in that respect, my Octavia hasn’t been too bad at all. I have often travelled over my 10-mile commute and used an indicated 10 miles, which is pretty good going. On longer journeys that include more varied speeds, the '32 miles' range seems to last 25 miles or thereabouts, which may strike you as a poor return on that official 41 miles figure.

However, if a PHEV fits into your lifestyle – by which I mean you do lots of short journeys and can charge up your car regularly – you can see some outstanding MPG figures.

For example, in the first 27 days of my time with the Octavia, I did 274 miles and used absolutely no petrol at all. In other words, I did the lot on electric power alone. I achieved that by deliberately plugging it in whenever I could, and luckily, all the journeys I needed to do were within the compass of my car’s electric-only range. 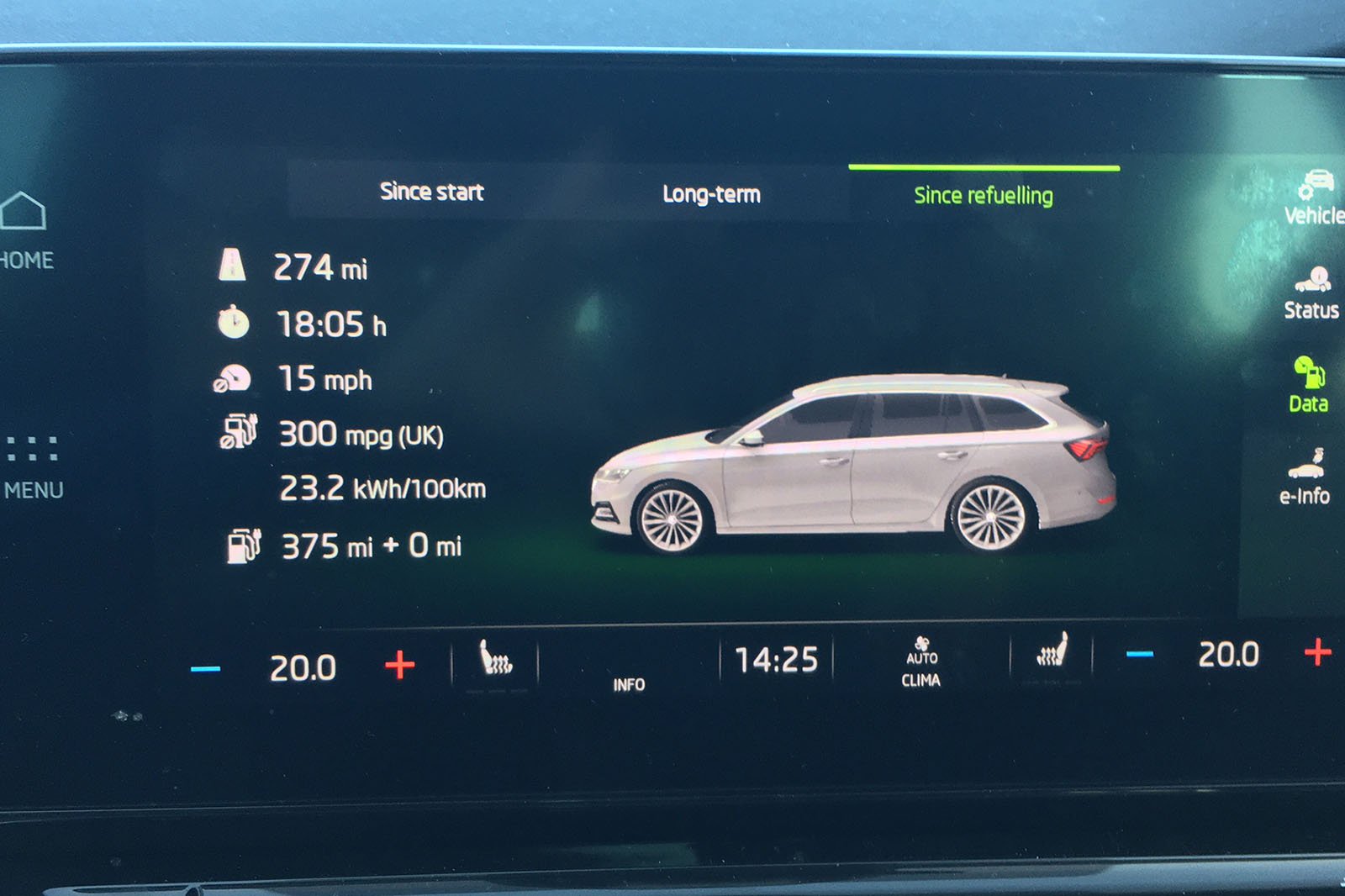 Alas, on Day 27, a 54-mile journey from Surrey to Kent beckoned, and 25 miles into it the petrol engine cut in for the first time. Up until that point, I had basked in the presence of the magic '300mpg' figure on the digital dash – an arbitrary number showing that not a drop of fuel is being burned. By the end of my 54-mile journey (the first 25 of which were EV only, remember) the digital readout told me I’d achieved 83.3mpg. That's pretty good going.

Now, of course, while I might not have been using much petrol, electricity costs money too, and recent rises in prices mean that at my house, the current charge (pun unavoidable) is probably not inconsiderable. More than the cost of the petrol, though? I doubt it, but those two costs are something I’m certainly going to be looking at in the months ahead.

The new Skoda Octavia: why it's perfect for company car drivers