How does the latest all-electric version of Smart's dinky city cars compare with the conventionally powered models?... 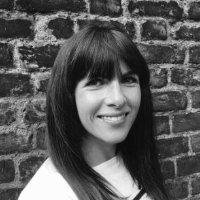 The first electric Smart Fortwo was introduced in 2007, when 100 were tested across the steets of London. Now, almost a decade on, the momentum of electric vehicles (EVs) has gained considerable pace, so these new Smart electric offerings need to be better than ever.

It's the fourth-generation of Smart’s electric powertrain and, for the first time, is available across the entire model range: the two-seater Fortwo, its open-top sibling, the Fortwo Cabriolet, and the four-seater Forfour. The Cabriolet also has the claim to fame of being the only all-electric convertible on sale today.

Prices for the Fortwo Electric Drive start at £16,420 (after a Government grant) – a considerable premium over the £11,370 entry-level price of the conventionally powered Fortwo. 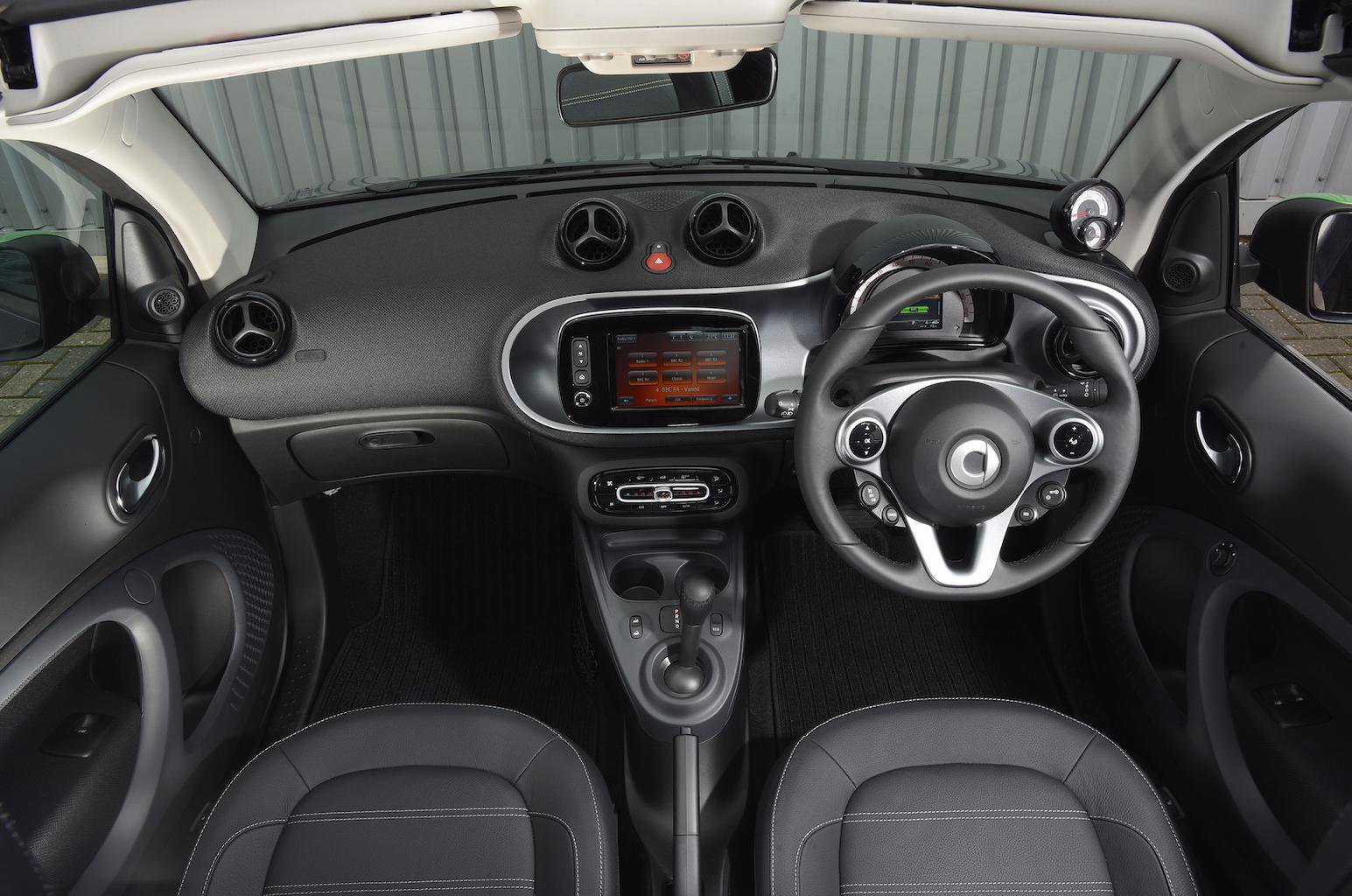 With an 80bhp electric motor powered by a 17.6kWh battery, the Fortwo and Forfour have quiet, smooth and effortless power delivery. The electric motor is paired with a single-gear automatic gearbox, making driving easy in the city.

Thanks to the instant torque from the electric motor and the way the Fortwo Electric Drive has such excellent accelerator and braking response, it's ideal for snaking your way through heavy traffic.

The electric Smarts aren’t really suited to motorways, but the electric Fortwo’s 0-62mph time of 11.5sec is more than adequate for this type of car. The Forfour’s 0-62mph time of 12.7sec means that it's fractionally slower off the line, but you’d be hard-pressed to feel the difference in day-to-day driving.

The electric Smarts actually handle better than their petrol-powered siblings. That’s largely because the battery under the seats gives them a lower centre of gravity, but also because they have firmer suspension, resulting in slightly better body control.

The Fortwo Electric Drive's steering is very light – a trait found in most city cars – and lacks feedback but, combined with the car's compact dimensions, it makes light work of low-speed manoeuvres. The Forfour Electric Drive doesn’t quite have the incredibly tight turning circle of the Fortwo, but it is still very easy to move around awkward urban environments. So, how far will the car go on one charge? Officially, 100 miles – just 10 miles more than the previous electric Fortwo. But, realistically, you can expect something around 75 miles.

What Smart has improved is the cars' charging time. Using the standard 7.2kW charging system, the Smart can be charged to 80% in just 2.5 hours from a wallbox or six hours if you’re using a standard household pin. However, 2018 electric Smarts will get a 22kW charger that will provide the same level of charge in just 45 minutes. We’d recommend waiting until then if you're going to buy one.

As long as you only need to transport two people, the interior of the Fortwo is a neat, practical place to be, with plenty of space for driver and passenger, plus little touches such as cupholders and cubbyholes.

In terms of layout, it's identical to the standard Smart Fortwo, aside from an additional dashboard instrument that shows you how much charge you have remaining. There’s a mixture of materials in the Smart, which are largely of decent quality, albeit with the odd cheap-feeling plastic mixed in. 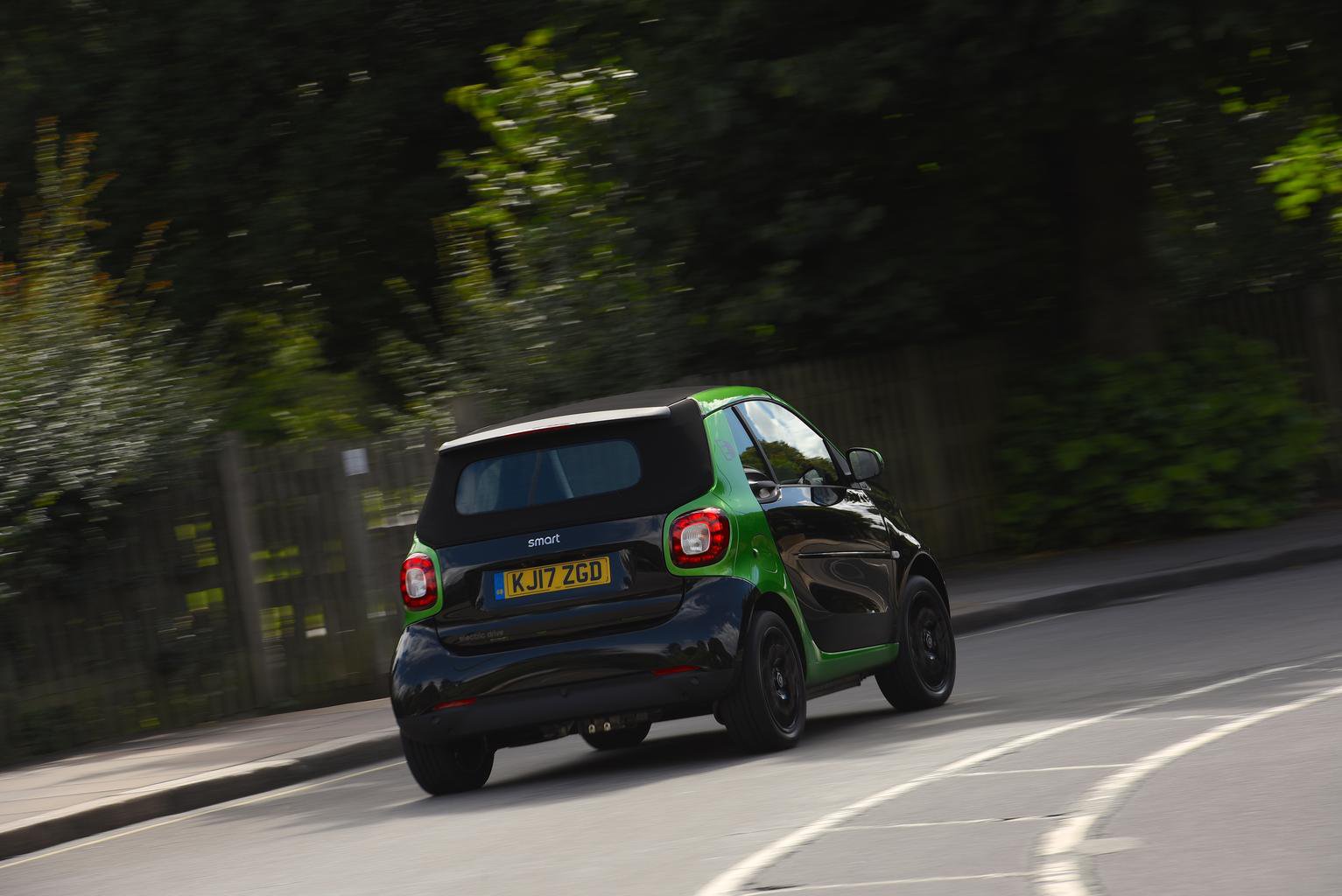 The Forfour is similarly spacious up front for two but, in the back, adults will find it cramped over a long distance. The storage capacity is much better than the Fortwo when you stow away those rear seats, which makes it much more practical than the two-seater, although it is still some way behind the level of practicality you get in electric rivals such as the Renault Zoe and Nissan Leaf.

In the Fortwo, as the battery is under the seats, boot space is the same as the standard car. There’s room for a few shopping bags – although not the full weekly grocery shop – and there's a net behind the seats that's ideal for storing loose bits and pieces.

Smart says buyers in the UK are likely to be offered just one trim level, which will provide an infotainment touchscreen with sat-nav, heated leather seats, cruise control, LED lights and an Aux/USB/Bluetooth media interface. Given the electric Smart's price, that means it would carry a premium of around £2000 over the equivalent conventionally powered model.

The system can also tell you details such as where to find the nearest charging station, while the car's remaining range can be taken into account when selecting destinations in the sat-nav.