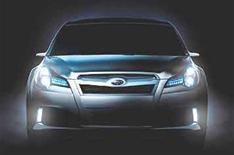 Here is the Subaru Legacy concept car, which shows how the next generation car will look.

The Legacy concept car, which will be officially unveiled at the Detroit motor show in January, showcases the design of the next saloon, which is expected to go on sale in 2010.

Subaru has released few further details, although it's clear from the concept car's flared wheelarches and front end that the styling is more aggressive than on the current model.

The concept car will have a 3.6-litre engine and have four-wheel-drive.