The Legacy is an enjoyable drive. The four-wheel-drive system gives the car fantastic traction, while strong body control ensures poised handling and fine composure. That does mean the ride is rather firm, but it never becomes uncomfortable. And, although the steering is accurate and responsive, it's frustratingly light at speed.

All three petrol engines perform well and have a distinctive, throaty sound. Wind noise isn't intrusive, but road and engine noise aren't as well contained at speed as in some rivals - the 2.0 becomes raucous when revved hard.

The Legacy's low-slung driving position is sporty, but the seat adjustment isn't very easy to move and the steering column adjusts for height only. There's plenty of leg- and headroom, and three can sit abreast in the rear, although foot space is tight due to the raised transmission tunnel. The boot easily holds a family's luggage, even though it's not as deep or well shaped as some rivals'. 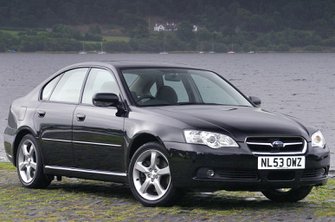