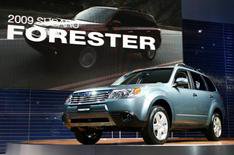 The music boomed and the intro video played.

'Every day is different' declared the message on the screen above Subaru's stage.

A couple of minutes later the video stopped and the speaker prepared to deliver his speech.

But just as his mouth opened, the music boomed and the intro video played again.

'Every day is different' declared the message on the video screen.

Was this some cunning joke? Was this video going to be subtly different, to highlight how small occurrences can influence how your day pans out?

'Don't you hate it when someone presses rewind instead of pause?' declared the speaker when the video had stopped playing for the second time and he finally got to speak.

Rule number three: if you spend a fortune on a fancy film, remember to buy a video player that's easy to use.